Google rolls out Network Intelligence Center for cloud and on-prem

Google Cloud has launched a Network Intelligence Center for network monitoring, verification, and optimization across cloud and on-prem data centers.

"Cloud networking has traditionally been kind of a black box," Shailesh Shukla, VP of product management for GCP Networking, told DCD. "And that has to change because customers need a little bit more visibility and control over what's happening." 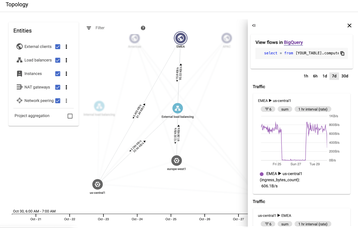 "And that can only be enabled by networking. Think of it as networking used to be about pipes and connectivity and bringing infrastructure closer to the user. Now, it's actually about enabling the application by letting all of these microservices talk to each other in a dynamic fashion, in a secure, reliable and low latency fashion."

"What we're talking about here is a comprehensive view of the entire global network which allows you end-to-end a monitoring of your connectivity, your topology, your performance, your firewall metrics, and rules and so on," Shukla told DCD. "So that you get a full view in one dashboard."

Several other modules are expected to follow, including a much-publicized AI and ML aspect. "So today, the four products are driven by a specific kind of analytics," Shukla said. "There's some strong analytics today, [but] what we're doing is incorporating machine learning and AI capabilities - we already have that work underway. All of the products which are underneath the platform will use AI and ML and become smarter and smarter."

Another promising development not yet ready for launch is "the ability to capture information from third-party tools, whether they are in on prem or in other clouds and other multi-cloud APIs," Shukla said.

"Now, just to be clear, that capability is not ready for launch, today - we are working on it, it's on the roadmap. Our goal would be that Network Intelligence Center will be something that's a living and breathing thing. So it will continuously enhance with these new products and new capabilities, including multi-cloud."