The decade-old campus was previously expanded in 2013, bringing the company’s total investment in the site to $1.8 billion.

What about the water? 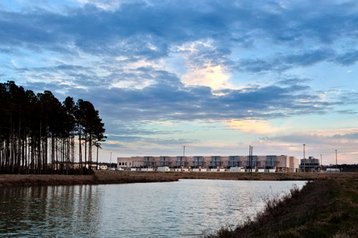 Records filed with Berkeley County, first spotted by The Post and Courier, note that Google is hoping to invest $600m in the facility, but is seeking a property tax break first. Under the terms of the deal, Google would have until the early 2030s to finish the development.

The proposal is technically being negotiated by Maguro Enterprises, the company Google created to hide its identity during the initial pitch for the facility back in 2006. The new expansion is currently called “Project Linden.”

But the project is not without controversy - last year Google filed for a permit to draw 1.5 million gallons per day from an aquifer to cool the data center, making the company the third largest aquifer user in the three counties around Charleston.

With a lack of clarity surrounding the amount of groundwater in the region, and how quickly the deep underground reservoirs refill, local residents and environmentalists soon opposed the move - as did other companies that used the aquifer.

As of May, the proposal has been put on the back-burner. Google “may reactivate our application though timing is unknown,” spokeswoman Amy Atlas told The Post and Courier.

Should Project Linden be approved, it is not clear how Google will cool the facility - in 2017, it was revealed it used four million gallons of tap water a day for the existing site, while also experimenting with rainwater capture and considering water recycling.