At the end of June, the Faster Consortium switched on the Faster cable, a 60 Terabits per second submarine cable between the US and Japan.

Now, Google, one of the consortium’s members, has stretched that cable a bit further, connecting the Land of the Rising Sun to Taiwan at 26 terabits per second. 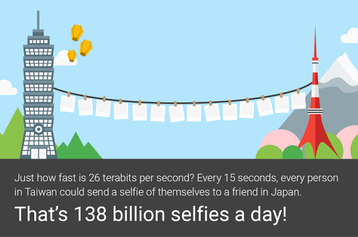 Keeping up with growth

“You may not notice right away, but this new cable should help Google products and services load more quickly across the region,” Yan Tang, network resource APAC regional lead at Google said in a blog post.

“It should also improve the reliability and consistency of this speedier experience, since the cable was strategically built outside of tsunami zones to help prevent network outages related to natural disasters.”

He continued: “With more people coming online every day in Asia than anywhere else in the world, we’ve been working hard to invest in the infrastructure needed to make the Internet work for all of us who live in the region.

“That’s why we’ve built two data centers in the region and have already expanded our facility in Singapore. It’s also why we’re investing in these undersea cables – to make everyone’s computing just a bit faster and to bring people around the world just a bit closer together.”

In addition to the $666 million Taiwanese data center and the Singapore DC hub that is doubling in size, Google has its eyes on Japan, with plans to bring Google Cloud Platform to Tokyo.

To keep all these data centers connected, as well as to ensure consumers have fast Internet connections that ultimately benefit web giants, US Internet firms have invested heavily in submarine cables in recent years.

In addition to a Google submarine cable in Brazil, companies like Microsoft and Facebook have teamed up for cross-Atlantic cables, while Amazon has helped fund a 14,000 km transpacific cable that is currently being laid.