Google has added a new availability zone to its Oregon (US) region, in which it has also made two new services available: CloudSQL and regional Managed Instance Groups (MIGs).

CloudSQL is a managed service platform that supports PostgreSQL, and MIGs allow virtual machines to be spread across multiple zones to avoid downtime in case an outage occurs, like the one affecting AWS’ US-East-1 region in February. 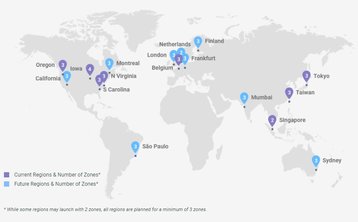 Whilst additional regions help reduce latency for customers running workloads on the GCP, each region is subdivided into availability zones, defining where workloads are hosted. This means customers can spread their resources across several regions and zones in order to avoid service disruptions and outages. And where some services are region-specific, others are zone-specific.

GCP recently announced plans to create three new regions in Montreal, California and the Netherlands, and launched a region in Northern Virginia.

This year, the company has plans to expand in Mumbai, Singapore, London, Sydney, Sao Paulo, Frankfurt and an unspecified site in Finland, in addition to its eight existing regions, which include 23 zones, and 100 points of presence around the world.

Google’s cloud platform has gained momentum since being launched in 2011, five years after Amazon first unveiled its Web Services. A Synergy Research report published in April found that GCP had experienced 50 percent revenue growth year-on-year, despite its market share remaining significantly lower than that of AWS, Microsoft and IBM. Nevertheless, Diane Green, the company’s senior vice president, expects Google Cloud to become the world’s largest IaaS provider within the next five years.