Google Cloud announces Anthos for Telecom, partners with AT&T on 5G and Edge

Google Cloud has announced Anthos for Telecom, which it says will bring its Anthos cloud application platform to the mobile network edge.

First launched last year, Anthos is based on the Google Cloud Services Platform. Available both in the cloud and on Google Kubernetes Engine (GKE) On-Prem, Anthos lets organizations manage workloads using the same interface on Google Cloud and rival clouds such as Amazon Web Services (AWS) or Azure.

Along with the announcement, the company unveiled a strategy to help the telecommunications industry harness the potential of 5G and improve operational efficiencies in core telecom systems. Google Cloud said that it would partner with AT&T to test a portfolio of 5G Edge computing solutions for industries like retail, manufacturing, transportation.

“We’re working with Google Cloud to deliver the next generation of cloud services,” Mo Katibeh, EVP and CMO of AT&T Business, said. “Combining AT&T’s network edge, including 5G, with Google Cloud’s Edge compute technologies can unlock the cloud’s true potential. This work is bringing us closer to a reality where cloud and Edge technologies give businesses the tools to create a whole new world of experiences for their customers.” 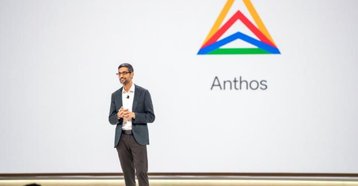 Anthos represents a strategic shift by Google Cloud to support multi-cloud environments and comes with programmatic APIs. New cloud configurations can be made and applied across all systems that it manages at once, giving enterprises seamless governance regardless of an actual workload’s environment.

In response to a query from DCD about how Anthos for Telecom differs from Anthos when it was first launched, Eyal Manor, VP of engineering at Google Cloud described Anthos as consisting of two layers. While top layer with its open APIs stayed the same, the team made significant improvements under the hood, he explained.

“As we adopt [Anthos] to different environments at the Edge, we have to re-engineer it for very low latency part of the networking stack. This includes areas such as the storage and network, and how it integrates with GKE. That’s the area of the most investment - to enable substantially higher networking throughput to support services such as 5G compared to normal enterprise applications.”