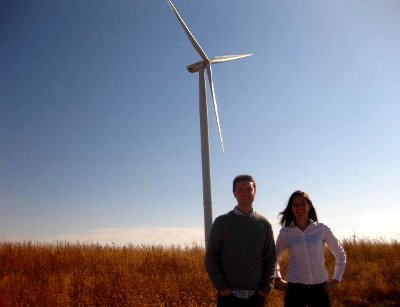 Google has bought a US$75m equity stake in a wind farm operating in Iowa, home to one of its gigantic data centers.

Operators sell all energy the wind farm in the Town of Rippey produces to the Central Iowa Power Cooperative, a collective provider of energy to more than half of the state’s counties. For Google, which contracts for an enormous amount of power for its Council Bluffs, Iowa, data center from another wind farm, the investment is about both the environment and profit.

“Money for this investment comes out of the Google Inc. treasury,” a Google spokesperson wrote in an email. “You can think of it as a way to diversify our cash holdings while investing in an area that we think is important to support.”

In 2010, Google signed a 20-year power purchase agreement to buy all energy generated by a 114MW wind farm in Stony County, Iowa. The company sells energy from the NextEra Energy Resources Story County II farm into the grid, but strips green credits from it, applying them to energy it buys to power its data center.

Google has a similar arrangement in Oklahoma, where it contracts for about 100MW of wind power and where it also has a large data center.

Its latest investment in the wind farm by a company called RPM Access in Iowa, however, falls into a different bucket, however. This is part of its program to simply invest in renewable-energy generation capacity, mostly in the US, but also in Germany.

Google does not break out its individual data centers’ power consumption. In 2011, however, the company’s operations consumed about 2.7m MWh total.

The company says it has been 100% carbon-neutral since 2007 through a combination of renewable-energy investments, renewable-power purchase agreements and green-credit purchases.