And Omaha planners let it happen

Google has bulldozed five acres of native prairie in Omaha, against City of Omaha guidelines, according to biologists.

The plot of prairie land on the junction of State Street and Nebraska Highway 133 should have been protected by local planning rules, but was cleared in 2021, to make way for a new Google data center, according to the Nebraska Examiner.

Local guidelines should have called for Google to preserve natural features such as prairies, but local environmental experts say the rules were simply ignored in the rush to approve the $750 million project. 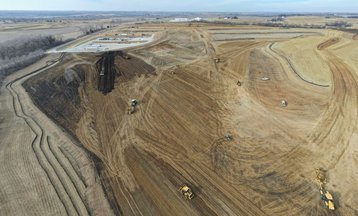 “The city dropped the ball,” said Glenn Pollock, who has helped manage prairie plots around Omaha for 30 years.

The City of Omaha has a Master Plan which demands measures to protect natural features including ravines, wetlands, bluffs, and prairies. The pocket of prairie at State Street was marked on a City map, and any damage or destruction of such features should be mitigated under the guidelines, with each acre replaced by two acres of fresh prairie.

The Examiner found that the subject of the prairie simply didn't come up during the planning discussions.

Prairie champions such as Pollock didn't have a chance to bring it up, because the prairie was bulldozed about a year ago, and Google's plans were kept secret until they were announced in April this year.

Pollock thinks Google may not have been aware it was destroying native prairie but, with its environmental aspirations, should have checked: “They should have had a biologist go to look at a site to see what they bought.”

The site was a surviving remnant of tallgrass prairies that once covered most of eastern Nebraska, and have been almost completely removed by farming and development. Omaha only has around eight virgin plots left - down from 22 in 1980.

The sites are important because deep-rooted native prairie plants are resistant to drought and other adverse conditions. The historic prairies gifted Nebraska with very rich soil and could provide clues to how to survive future droughts.

Republican Congressman Don Bacon congratulated Google on investing in a "Silicon Prairie," according to North Omaha news source NOISE. It appears that it is doing so at the expense of some of the remaining traces of the original prairie.