Google has long said it wished to transition to being fully powered by renewable energy, making numerous large power purchase agreements, but now it has set a definitive date - 2017.

Already the world’s largest corporate buyer of renewable power, Google plans to use energy derived exclusively from wind turbines, solar farms and hydroelectric dams, across both data centers and offices.

“To reach this goal we’ll be directly buying enough wind and solar electricity annually to account for every unit of electricity our operations consume, globally,” Urs Hölzle, SVP for technical infrastructure at Google, said in a blog post.

He added: “And we’re focusing on creating new energy from renewable sources, so we only buy from projects that are funded by our purchases.”

Hölzle said that the cost of wind and solar has come down 60 percent and 80 percent respectively over the last six years, proving both a cost-effective investment and a stable one that is not as prone to price swings as some forms of fossil fuels.

“But this is just the first step,” Hölzle continued. “As we look to the immediate future, we’ll continue to pursue these direct contracts as we grow, with an even greater focus on regional renewable energy purchases in places where we have data centers and significant operations.

“Since the wind doesn’t blow 24 hours a day, we’ll also broaden our purchases to a variety of energy sources that can enable renewable power, every hour of every day. Our ultimate goal is to create a world where everyone — not just Google — has access to clean energy.”

Whether Trump’s administration will seriously hamper the progress of renewable energy is an area of ongoing debate.

But Google may ultimately contribute more to the renewable energy movement than just financing - in 2013 it purchased Makani Power, which aims to generate power using drones.

So far the group, which is part of Alphabet’s X division, has filed several patents and tested drone windfarms in Hawaii. Earlier this month a patent was granted for Makani drones tethered to ships, which was conflated with an old Google patent for data center ships by several publications, but DCD does not believe they are related.

In September, Google also announced a commitment to a ’Zero Waste to Landfill’ policy for its data centers, which aims to prevent waste generated at its facilities ending up in municipal waste sites. 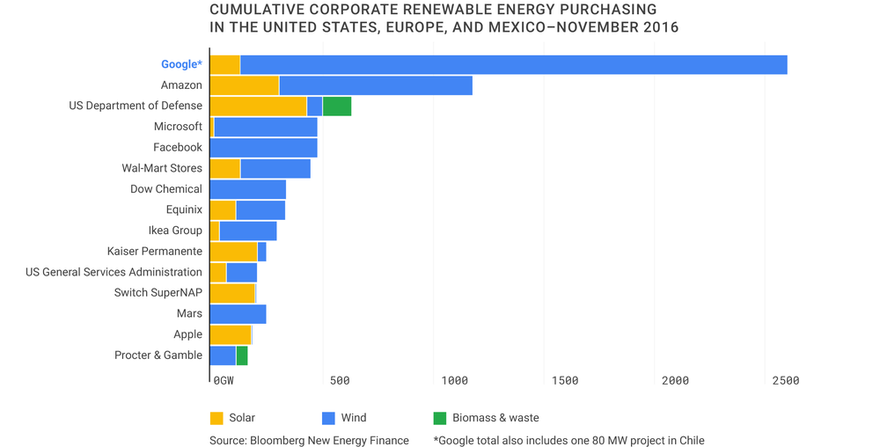