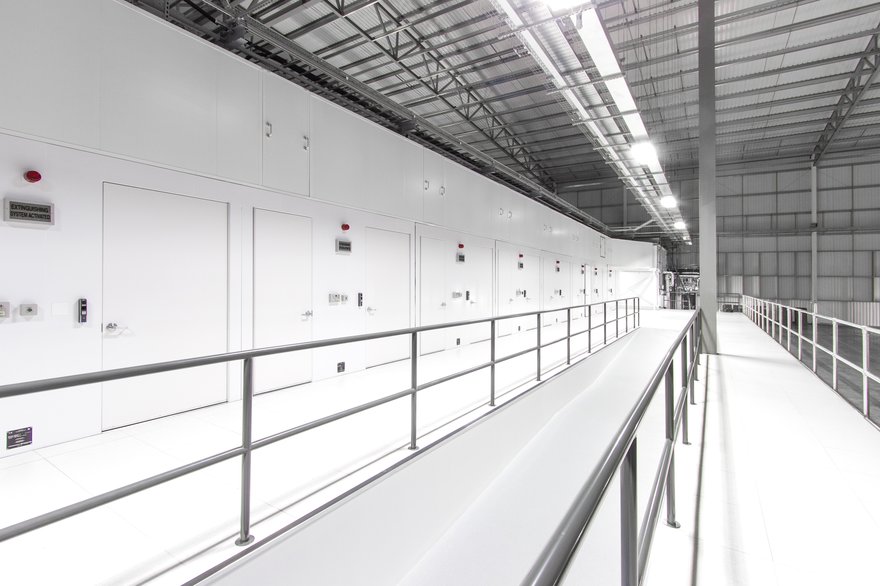 IO has opened its UK data center in Slough, with Goldman Sachs in place as its anchor tenant.

The 10,000 sq m (100,000 sq ft) site can have up to 20MW of power in its first phase, and is only the company’s second site outside the US. Financial firm Goldman Sachs is a long term partner, and was the initial tenant in IO’s sites in New Jersey, US and in Singapore. As is to be expected with IO’s modular model, the site was mostly a giant empty hangar when DatacenterDynamics visited this week. Modules will be created as customers demand them in the Arizona factory of Baselayer - the modular hardware firm which IO spun off as a separate company last year.

This opening is a sign of the company’s ongoing commitment to expansion, enabling it to serve its global customers in one of the fastest growing markets in the world. This is IO’s second modular data center outside of North America, following Singapore in 2013. As part of its long-term, strategic technology partnership with IO, Goldman Sachs has signed on as the UK facility’s first customer.

The IO data center is designed to Tier III standard, and currently has power for a quarter of the space in the hangar. Inside there is a row of “show” modules in one corner, installed on the raised flooring required by IO’s water cooling system, and a row owned by Goldman Sachs in another corner, sitting lower to the ground and using a free cooling system which Goldman specially requested.

As new customers appear, IO will order up modules to be built in Baselayer’s factory in Arizona, and extend the under-floor cooling as required. This will normally take 90 days for new capacity, said Nick Jefferson, Baselayer’s EMEA director. This is the first international deployment for Baselayer’s latest Eco modules, which include Siemens power distribution, and Eaton UPS units.

Space in the Baselayer units can be bought in increments, with a D400 module holding one row of 18 racks (also available partitioned into two half-units) and a double width module housing 50 racks in three rows. Power density can be up to 30kW per rack, depending on which option is chosen, and what level of redundancy is used.

Nigel Stevens, UK managing director of IO, is happy with the split from Baselayer: ”It’s the best thing for the companies - it has brought clarity,” he said. Baselayer can now pursue other customers freely (its partners include cloud/colo player CenturyLink. For IO, it also offers freedom: “If a customer wanted to use different kit, we’d do it - but not a different modular supplier.”

The Slough Trading Estate has its own police force, and camera cars for surveillance, and it also has unrivaled power supplies and network connectivity, said Stevens. The Slough site IO is starting with multiple network providers.

“We are carrier neutral, but it can be a chicken and egg situation,” said colo sales director Rob Cooper. The presence of Goldman Sachs as tenants encouraged providers, so Colt, AboveNet, BT and Vodafone are already present, “…and we hope for ten more,” Cooper adds. Cross-connects between providers are free for IO customers.

The Emerson cooling system circulates water under the modules, which is cooled by fans and stored for use on site. The modules are monitored and managed by Baslayer’s IO.OS operating system, which provides a management screen, which indicated that cold water is delivered at around 7C, existing the system at about 17C.  IO staff quoted a “partial PUE” of 1.06 for the modules.