According to the court, German intelligence services violated everyone's right to privacy

In a judgment on Tuesday, Germany's First Senate of the Federal Constitutional Court ruled that the Federal Intelligence Service (Bundesnachrichtendienst – BND) is bound by the nation's constitution when conducting surveillance.

According to the court, the BND violated the "fundamental right to privacy of telecommunications" in relation to the Basic Law, Grundgesetz, which informs the German Constitution.

The Court also ruled that the Basic Law afforded foreigners in Germany or abroad privacy protections from the state's intelligent services.

The ruling also warns authorities about working with foreign agencies, as there are not enough sufficient safeguards to ensure privacy rights are protected. 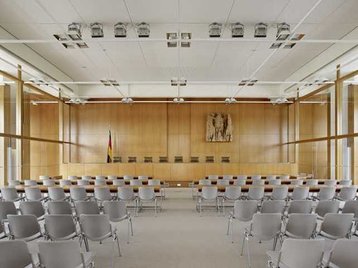 The interior of the Federal Constitutional Court – Bundesverfassungsgericht.de

The conflict arose when the Merkel Government passed an amendment expanding police powers in the Federal Protection of the Constitution Act (Bundesverfassungsschutzgesetz) in 2016.

Complainants of the amendment brought the case to the Constitutional Court and said the amended law failed to uphold universal human rights to privacy guaranteed by the Basic Law.

As of the ruling on Tuesday, parts of the amended law must be rewritten by the end of 2021, stating the individual right to privacy in communication, whether by letter, telephone, or online, be established as a universal right.

According to the amendment, the legislation sets up an improved system of information-sharing between intelligence services with regard to Islamic terrorism.

A joint initiative in 2015 - 2016 was set up by counter-terrorism organizations across Europe to share information on threats in The Hague, Netherlands.

The amended German legislation was meant to create a legal basis to allow authorities to participate in information sharing.

As of this ruling, the court called for stronger controls over the BND's ability to share information with international partners.