A new Atos BullSequana supercomputer has been delivered in Hamburg, Germany. 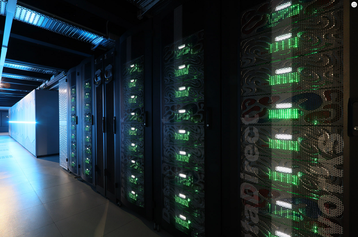 The XH2000 system will be used to create high-resolution global climate and Earth system models and simulations. The CPU partition includes 2,832 computing nodes with two AMD Epyc processors, and the total main memory of the system is more than 800 Terabytes. It is equipped with Nvidia Mellanox InfiniBand HDR 200G technology.

"The new system is the basis of our services. The powerful new systems are a better tool for research, and thus also for the risk assessment of climate change for society and ecology. The major part of the German climate simulations that contribute to the IPCC reports are calculated at DKRZ," said Prof. Thomas Ludwig, director of DKRZ, and adds: "As with the predecessor model, we attach great importance to high energy efficiency. The system features high-temperature liquid cooling, and part of the waste heat is fed into the heating system and re-used in the university building next door."

HLRE-4 is funded with a total of 45 million Euros by the Helmholtz Association, the Max Planck Society and the Free and Hanseatic City of Hamburg.

“Levante represents a step-change in computing, by enabling more physical models based on grids as fine as 2.5 km and for periods of decades, it will allow us to open new frontiers in climate science,” said Prof. Bjorn Stevens, director of the department Atmosphere in the Earth System at MPI-M. “We look very much forward to working with the team at DKRZ, and within the broader German climate research community, to explore these frontiers."

DKRZ launched with a Control Data Cyber-205 system capable of 2,000 megaflops via a single CPU, and has housed a dozen systems since. The center's previous machine, an Atos/Bull DLC b720 system known as HLRE-3/Mistral, launched in 2015 and had a peak performance of 3.14 petaflops.

Udo Littke, CEO of Atos in Germany, said: "We are very pleased that the new supercomputer is now available to the scientific users of DKRZ. With the help of state-of-the-art components in our BullSequana XH2000 system, the DKRZ now has significantly more power and memory for demanding climate simulations.”