Flexential to break ground on its largest data center in Hillsboro

Flexential will begin the construction on a third data center on its Hillsboro campus in Oregon on October 1. 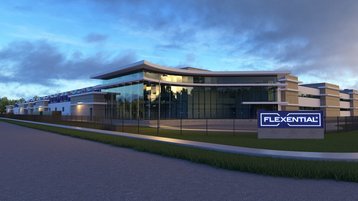 An artist's impression of Hillsboro 3 – Flexential

Announced back in May, the new facility will be the company's largest data center to date. A virtual groundbreaking is to be held on October 1 at 12:30 pm Pacific Time.

As part of the company’s FlexAnywhere platform, the new data center will provide low-latency connections to around 40 major US cities. Via its link to Flexential's Hillsboro 2, the data center will have a connection to the Network Access Point (NAP) of the Northwest, which houses the New Cross Pacific subsea cable (NCP). The cable supports China Telecom, China Unicom, Chunghwa Telecom, China Mobile, and Korea Telecom.

Back in August, Flexential announced it was launching a 5MW expansion of Hillsboro 2. Following the project, Hillsboro 2's total square footage increased to 242,000 sq ft (22,000 sq m) and 18MW of capacity.

Hillsboro 3 is also close to Hillsboro 1, a data center that hosts the likes of AWS, Azure, Oracle, and Google Cloud. According to Flexential, the Oregon market is dense with cloud and colo companies, making it an ideal environment for intensive applications such as AI and machine learning.

The companies involved in the data center’s construction are The Mulhern Group, KW Engineering, Sturgeon Electric, and Skanska.