Construction has begun back in Sweden, while ground breaking ceremonies have taken place in Samoa, ahead of the deployment of eCentre modules this June. 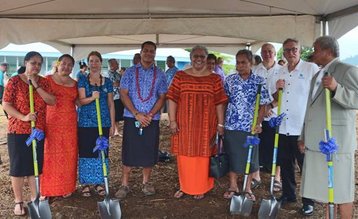 “We are very excited to be a part of such a transformational project for the country and people of Samoa,” Flexenclosure CEO David King said.

“eCentre is the world’s most versatile data center building and we expect to see significant growth of our cable landing station business over the coming months and years.”

Emmanuel Delanoue, CEO of SSCC, added: “Samoan people and the region will benefit from fast, reliable and affordable Internet which will open up opportunities for social and economic development.

“Given the national importance of this project, we chose Flexenclosure to supply the cable landing stations as they have a very strong track-record in deploying turnkey, customized and ruggedized solutions able to withstand the harshest of weather conditions like those of the Pacific.”

The landing stations at Vavaisse and Tuasivil terminate the new submarine Tui-Samoa cable, connecting Samoa, Fiji, and the Wallis and Futuna islands.

The 1,470 km cable system will be capable of delivering up to eight Tbit/s using 100 Gbit/s transmission technology. It is part funded by the Asian Development Bank, the World Bank and the Australian Government.

“Government will also leverage the improved connectivity to speed up its eGovernment program and improve service delivery to our people. The ‘Strategy for the Development of Samoa’ (SDS) sets out government’s vision to help improve the lives of our people, and Tui-Samoa Cable is one of the key government enablers that will help us achieve that goal.”