eSite x10 contains all the elements of the power distribution system required to establish a Point of Presence or a base station, save for batteries and gensets. It was built to be deployed outdoors, completely impervious to water and dust and requiring no maintenance.

“The environments that these things go into are so harsh, they are so badly treated that putting a load of indoor components in a cabinet to make an outdoor unit just isn’t good enough,” said David King, CEO at Flexenclosure. ”We decided that what we should do is go the same way the telecoms equipment has gone, and build a completely outdoor unit, and that’s what the x10 is.”

King told DatacenterDynamics that in the future, such system could be adopted to support small ‘edge’ data centers. 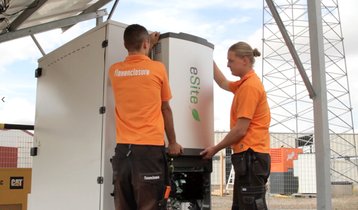 Set it and forget it

Flexenclosure is an expert in pre-fabricated data center design, having sold thousands of its eCenter modules worldwide. These modules are especially popular in the developing markets, since they can be constructed in a fraction of the time it takes to erect a traditional facility, and can be easily shipped to areas where building a permanent data center is impractical.

With eSite x10, Flexenclosure has expanded its product portfolio, offering what it hails as the world’s first hybrid power system purpose-built for outdoor telecom sites.

Three years in development, x10 is housed in a sealed, tamper-proof unit, with passive convection cooling that has no moving parts and requires no filters. It can be connected directly to a generator, a bank of batteries or even a solar panel array, with solar power inverters included as standard.

“We decided that battery technology is going to move ahead independently, and we need to be agnostic to batteries, and appreciate that different companies have different preferences,” King said. ”Someone will have a high investment, long lifetime approach, with as much Lithium Ion as they can get. Some will want a lower CapEx, and will worry about the problem in a few years. The batteries are independent of the unit.”

The protection of the enclosure has been rated IP65, which means it will withstand ‘low pressure water jets from any direction’ and individual modules weigh just 71kg so they can be carried by hand.

eSite x10 also replaces traditional mechanical switching between the grid and the genset with patented ‘soft power switching’ that protects the unit from potentially damaging input power. The hardware is accompanied by a software control system that enables predictive maintenance and can be operated remotely.

The design life of each eSite x10 module has been estimated at 10 years.

King said that there have been discussions about adopting x10 for small data center use, but the company doesn’t have a clear roadmap of how to productize this - at least not yet. ”If you’ve got a mini data center, I think of places where data center technology needs to be pushed out further and further in emerging markets, to small villages, and you need something that’s just housing a few racks, it doesn’t have a big power load - in that scenario an eSite could be used to manage the power for a data center.”