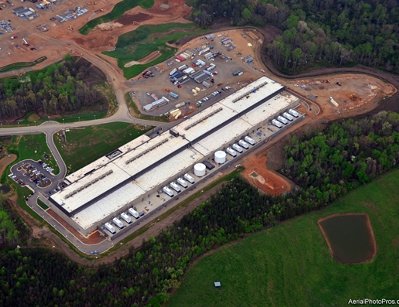 Facebook has brought online its second self-build and self-operated data center. The company announced the launch of the facility in Forest City, North Carolina, on Thursday, or 16 months after breaking ground at the site.

The data center is the first major deployment of the second generation of web servers designed through the Open Compute Project initiative, a project to outsource hardware and data center design.

The v2 OpenCompute Project servers are running on Intel’s newest Xeon E5-2600 processors based on the chip-maker’s Sandy Bridge architecture.

“Forest City is the first major deployment of the v2 Open Compute Project web servers, which are in turn are some of the first to use Intel's Sandy Bridge processor in production,” Facebook’s data center manager George Henry wrote in a blog post.

The North Carolina facility is also the first live test of the outdoor-air cooling designs developed through the Open Compute Project.

The data center campus consists of two buildings, the first of which is now online, and the second of which is expected to come online later this year. The second building mirrors the first in design.

The first data center Facebook designed and built for itself is in Prineville, Oregon. That site came online in 2011, and the company has been working on expanding capacity there.

Another Facebook data center is going up in Lulea, Sweden.The company plans to launch that facility before the end of 2012 as well.

Facebook’s total capital investment in data center infrastructure – including the cost of servers, networking equipment and storage, as well as data center construction – was $606m in 2011.

Simultaneously with launching the Prineville site, Facebook launched the Open Compute Project, releasing some of its designs for servers, electrical and mechanical infrastructure. The idea was to open the designs to public access so others can use them for their own projects and improve on them.

Facebook, Intel, Rackspace, Arista Networks and Goldman Sachs are represented on the organization’s board.