Enel Green Power North America, the utility responsible for Rattlesnake Creek, said it will finance the project using its own resources. Enel acquired the development from Tradewind Energy, its long-term partner headquartered in Kansas. Tradewind has been trying to build a wind farm in this location since 2013.

Rattlesnake Creek is expected to output around 320MW once it is fully operational, 200MW of which will be used by the social networking giant under a bundled, long-term power purchase agreement. 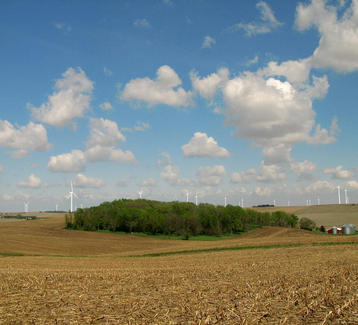 Facebook has already commenced construction of two 450,000 square foot (41,800 sq m) data centers in Papillion, alongside a 70,000 square foot (6,500 sq m) administrative building. The project is expected to take about 18 months, with the facilities coming online in 2020.

The wind farm, built by the US subsidiary of Italian gas and electricity giant Enel, is intended to help the company meet its sustainability goals.

Enel was established as a public body in 1962, and a quarter of its shares are still owned by the Italian government. Rattlesnake Creek is its first project in the state of Nebraska.

“This project consolidates our growing presence in the US as our company enters into a new state and expands our business with new partners,” said Antonio Cammisecra, head of Enel Green Power.

“We are thrilled to be able to support Facebook’s growing renewable energy needs in Nebraska and be a part of driving economic development in the region.”

Facebook previously said that the wind farm would not be viable if it wasn’t for the massive energy requirements of its data centers. Once fully operational, Rattlesnake Creek will be able to generate around 1.3 TWh annually, helping avoid the emission of around 940,000 tons of CO2 each year.

“We came together with the Omaha Public Power District, Tradewind Energy, and now, Enel Green Power, to ensure renewable energy solutions are accessible not just to Facebook, but to other companies as well,” said Bobby Hollis, director of Global Energy at Facebook.

“Today, we are one step closer to our goal of powering all of our operations with clean and renewable energy, and we are grateful to our partners for this collaboration.”