Adjacent to the facility it started building two years ago

Two years after breaking ground on its first Irish data center, Facebook is planning another two facilities on the same campus in Clonee, Meath County, 10 miles (17km) north of Dublin, according to the Irish Times.

The data centers, representing an investment nearing €300 million ($349m), will be built on the same 200-acre plot as the company’s first facility, on which Facebook is spending approximately $220 million. Altogether, the new data centers will span 57,000 square meters (613,540 sq ft). 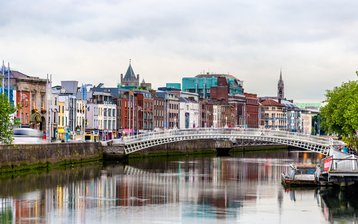 View of Dublin with the Ha’penny Bridge, Ireland – Getty Images

Ireland’s still got it

During the construction phase, the project could employ up to 1,400 people.

Facebook’s latest investment in Ireland will be hailed as a success for the country, which, despite being a highly popular location - the value of all data center investments is predicted to reach €9 billion ($10.48bn) by 2021, according to Host in Ireland - has also had its share of bad press due to projects being delayed during planning stages.

Dublin’s electrical grid is also under pressure, with the problem exacerbated by power-hungry data center projects. But rather than dissuade them, this has instead seen companies take matters into their own hands and use innovative approaches to energy provision.

For instance, Microsoft is installing 16 gas-powered generators totaling a capacity of 18MW on the site of one of its planned data centers at the Grange Castle Business Park; meanwhile local provider Dublin Routing 4 has chosen to rely on gas pipelines rather than the city’s antiquated, overburdened grid.

It is unclear whether Facebook intends to take a similar approach with the new facility, though some indication may come from the fact that the planning permission for the first data center on site mentioned the construction of a 220 kV substation and associated connections to the local grid.