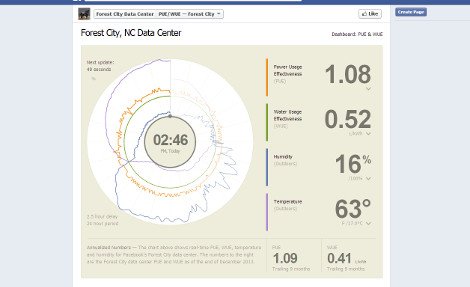 “In the spirit of transparency, we encourage others to share these data as well,” Lyrica McTiernan, sustainability program manager at Facebook, wrote in a blog post. “To make this easier, today we’re open sourcing the code for these dashboards so anyone can use it.

The metric was meant for internal use by data center operators. Mark Monroe, former executive director of The Green Grid, said during a panel on metrics at the DatacenterDynamics Converged conference earlier this week that PUE was not meant to be used as many companies do today to advertise their energy efficiency externally.

It is very easy for a data center operator to tweak the way PUE is measured to improve the outcome. Still, many companies have chosen to publicize PUE numbers as part of their outward corporate-sustainability communications.

The Green Grid created WUE on its own, extending the concept to data center water consumption, comparing total water delivered to water used to cool the IT environment.

Facebook launched PUE and WUE dashboards for its Prineville, Oregon, and Forest City, North Carolina, data centers about one year ago. It open sourced front-end code for the dashboards around the time of the launch.

Now, code for both front-end user interface and back-end data aggregator is on GitHub, the popular open source code repository and contribution platform. They can be used together or separately, McTiernan wrote.

Facebook plans to launch dashboards for its newest Luleå, Sweden, data center in the coming months. Once its Altoona, Iowa, data center, which is currently under construction, comes online, it will get an efficiency dashboard of its own.

Cloud and hosting services provider Rackspace took part in beta testing the code. According to Facebook, the San Antonio, Texas-based company is considering using it for its own data centers.