According to Facebook, StatePoint Liquid Cooling (SPLC) can reduce data center water usage by more than 20 percent in hot and humid climates, and by almost 90 percent in cooler climates, when compared to alternative indirect cooling solutions. In development since 2015, the technology - which has been patented by Nortek - uses a liquid-to-air heat exchanger, which cools the water as it evaporates through a membrane separation layer.

This cold water is then used to cool the air inside the facility, with the membrane layer preventing cross-contamination between the water and air streams. 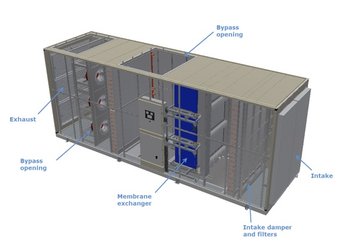 “The system operates in one of three modes to optimize water and power consumption, depending on outside temperature and humidity levels,” Facebook thermal engineer Veerendra Mulay said in a blog post.

The SPLC unit features integrated control of supply water temperature and distribution pumping, which Facebook says simplifies the piping requirements for the data center. It can be connected to a number of cooling delivery systems, such as fan-coil walls, air handlers, in-row coolers, rear-door heat exchangers and direct-to-chip cooling.

Facebook uses direct evaporative cooling systems in most of its data centers, and says they require 50 percent less water than a typical data center, as long as the climate conditions permit this. “But the SPLC system will allow us to consider building data centers in locations we could not have considered before,” Mulay said.

Buddy Doll, president of Nortek, added: “It’s time for data centers to highly consider alternative technologies that will protect our environment. This is why we are thrilled to work with Facebook who has been a leader in developing innovative data centers around the world.”