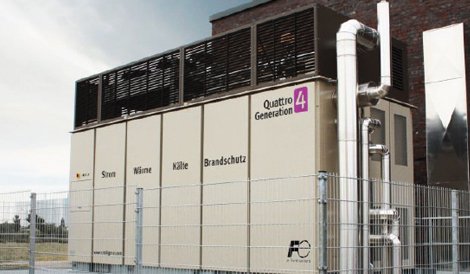 Colocation provider Equinix is taking an interest in fuel cell technology, placing a fuel cell model by N2telligence in its FR4 Frankfurt data center for extensive testing to see how the technology can perform in the data center environment.

It expects the fuel cell, which works by producing a chemical reaction between oxygen, hydrogen and water to create energy, with water being the by-product, to bring about large savings in energy and Carbon emissions.

The fuel cell works by creates Hydrogen by feeding a natural gas fed into an anode, where its molecules split creating atoms. These then emit electrons that create an electrical current once directed into a cathode.

The company behind the QuattroGeneration fuel cell, N2telligence, said while most fuel cells produce nitrogen in exhaust, the by-product of this process is water which can be used for heating or cooling, making it more eco-friendly.

The system requires natural gas of digester gas to operate and draws oxygen from the environment which means it can also be used to control the atmospheric conditions, creating a low-oxygen nitrogen rich environment to aid fire suppression.

“Depending on the materials to be protected, there are specific oxygen concentrations at which the flammability can be suppressed,” N2telligence said. “In the data center, for example, the appropriate oxygen content is according to experience at 15 vol 15% O2 (Oxygen).”

“With our system we are able to control the exact percentage of oxygen in your rooms and maintain it.”

The QuattroGeneration fuel cell is expected to produce about 800,000 kW hours of electricity a year, and 600,000 kWh of self-produced heat or cooling capacity, according to Equinix.

Such amounts could reduce Equinix’ energy consumption at the FR4 International Business Exchange by 24%, it said, and save about 150 tons of CO2 (Carbon Dioxide) emissions a year.

Sensors will be placed around the room to monitor oxygen concentration, and providing feedback via a central control unit which runs 24/7.