Show me the Monet

Monet Submarine Cable investors have picked Equinix to provide US facilities and services for the cable’s landing station architecture.

The 60 terabit cable links Brazil’s Praia Grande and Fortaleza with the US city of Boca Raton in Florida and is expected to be completed in 2017 - a delay from its original completion date of 2016. 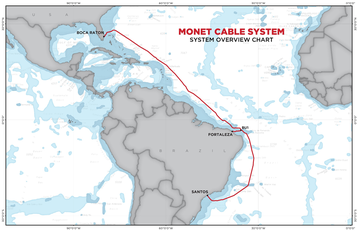 Ihab Tarazi, CTO of Equinix, added: “We are seeing strong demand from network, cloud and content customers looking to leverage our MI3 data center in Miami for access to the Latin American market.

“By offering direct connectivity to the Monet cable system and the possibility of a low latency route between São Paulo and Miami we can support the needs of key global customers looking to expand in the region.”

Equinix currently has 12 submarine cable projects announced, which are: