Equinix is entering new markets in Spain and Portugal

Colocation giant Equinix will considerably expand its presence in southwestern Europe with the acquisition of Itconic, a data center operator with four facilities in Spain and one in Portugal.

The deal also includes CloudMas, a subsidiary of Itconic that specializes in the design, implementation and management of cloud-based solutions. CloudMas is the only top-level AWS channel partner in Spain.

Itconic is currently owned by the private equity giant The Carlyle Group, which has made major investments into a variety of data center businesses, including Equinix itself.

Equinix will purchase the two companies in an all-cash transaction totaling €215 million ($259m), expected to close before the end of the year. 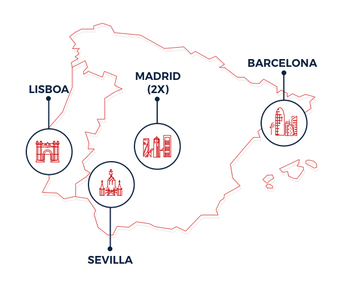 Itconic employs around 250 people and serves more than 400 customers across the Iberian Peninsula. The company owns five data centers: two in Madrid, one in Barcelona, one in Seville, and one in Lisbon, totaling approximately 322,000 square feet.

This is the largest independent network of data centers in the region, offering access to more than 100 connectivity providers and supporting more than 90 cloud and IT service providers, including AWS, Azure and Google Cloud Platform.

Itconic was created by Carlyle out of the ashes of Telvent Global Services (TGS) - a local IT provider with more than two decades of history. Carlyle bought TGS from Aurelius, another equity fund, in 2015. Aurelius gained ownership of TGS in 2013, after Schneider Electric decided to sell parts of the business it wasn’t interested in.

Equinix is one of the largest retail colocation providers in the world, with more than 180 data centers in operation. The acquisition of Itconic will grow its International Business Exchange ecosystem, and provide the company with infrastructure in an important region, at the intersection of submarine cables from Europe, Latin America and Africa.

“The large-scale deployments of new direct submarine cables between Europe, Latin America and Africa will connect through Iberia, making it a globally relevant key interconnection hub and a geographically important region for Equinix,” said Eric Schwartz, president for EMEA at Equinix.

“With the acquisition of Itconic, we will continue to deliver the level of excellence and Interconnection that the industry expects and which our customers demand. Our ongoing growth signifies our commitment to the region and to developing our global footprint to support the growing digital business needs of our customers.”