Its third in the city

Equinix is building another data center in Warsaw, Poland, for $34m.

The new WA3 International Business Exchange (IBX) is due to open in early 2020.

Robert Busz, the managing director for Equinix in Poland, said: “WA3 will be a big milestone and aid in further establishing cloud data sovereignty in Poland.

"Through our interconnection platform, large footprint in WA3 and via ECX Fabric, we can offer a perfect local ecosystem for global cloud service providers."

Equinix previously announced that it will also invest $45 million over the next five years into a product development center (PDC) in Warsaw.

The PDC would, according to Equinix, design software products, virtual IT infrastructure; and perform data science research. The center in Warsaw is one of three global Equinix “innovation locations” in addition to Singapore and Silicon Valley. 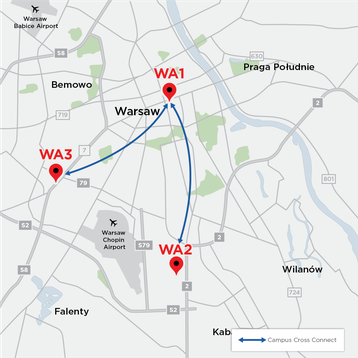 Poland is becoming very popular with tech companies as they expand globally. Aside from Equinix's new facility, Google announced in September it was to expand its cloud services into the country with three data centers.

Its services are to be spread among the availability zones and Google has also partnered with Chmury Krajowej ('Domestic Cloud Provider') to establish itself in Poland.

"We are very proud to partner with Google Cloud and to see them bring a new cloud region to Warsaw," Chmury Krajowej CEO Michał Potoczek said at the time.

“We believe in a multi-cloud strategy. A Google Cloud region, together with our own infrastructure, will allow us to build hybrid services which will bring even more value to our customers.”

Google Cloud currently operates six cloud regions in Europe and the tech giant plans to spend €3bn ($3.3bn) over the next two years. In Finland alone, it will spend €600m ($660m) on the Finnish Hamina data center, with plans to turn it into a cloud facility and build more data centers at its sites in the Netherlands, Ireland, and Belgium.