We toured the facility when it opened in 2015, which is designed to Tier III standards and makes use of BaseLayer’s Modular Data Center units. 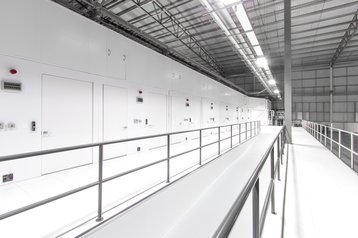 “Adding additional interconnection and capacity in this market enables local and international customers to leverage Platform Equinix to meet their changing business needs – whether that is to connect to networks, clouds, or financial markets – Equinix is the place to be.”

The LD10 International Business Exchange data center will be tethered to the other data centers on the Equinix Slough campus - LD4, LD5 and LD6.

IO, which operates data centers in the US and Singapore, built its own “data center in a box” modules before spinning that division off as BaseLayer in early 2015.

The company continued to make use of the BaseLayer Modular Data Center units since becoming two businesses, and Equinix says that it will maintain and expand the BaseLayer units in LD10 as needed.

Terms of the deal were not discussed, but in the last fully reported financial period, from launch to December 31, 2015, IO UK generated revenues of approximately $1.4 million.