An Bord Pleanála dismissed complaints from environmental groups, but reaffirmed company will pay towards local road and railway developments

Ireland’s planning board An Bord Pleanála dismissed complaints from a number of local and environmental groups trying to prevent the development, as well as the company’s own attempts to remove certain conditions around development.

The facility will be built on the condition the company contributes €1.85 million ($2.2m) towards a new road, and pay €2.29 million ($2.7m) towards the financing of phase 1 (Clonsilla to Dunboynethe) of the Navan to Dublin rail-line.

“It is considered reasonable that the developer should contribute towards the specific exceptional costs which are incurred by the planning authority which are not covered in the Development Contribution Scheme and will benefit the development,” An Bord Pleanála said in its decision. 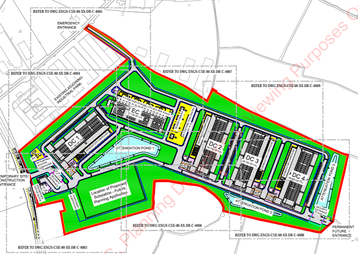 Dublin-based EngineNode was founded in 2018 by Jason O'Conaill, Eir's former head of data centers and founder of Amazon Web Services Usergroup Ireland, and Ronan Kneafsey, a former managing director of telecoms and data centers at Eir.

The company first submitted plans to build four two-story data centers with a combined gross floor area of ~92,100 sqm (990,000 sq ft) and substation on the 24.5-hectare site in 2019. It seems the on-site ‘energy center’ has since been removed from the plans.

Meath County Council granted permission for the facility last year but on the condition the company pay €1.85 million towards the new Bracetown Link Road, which it tried to challenge. John Spain Associates, consultants for EngineNode, said there was insufficient basis provided to require EngineNode pay the “considerable” contribution.

The decision was also challenged by groups including An Taisce and Friends of the Irish Environment (FIE), who took the issue to An Bord Pleanála. However, these have now been dismissed.

“The concerns raised by several parties (incl. An Taisce & Friends of the Irish Environment)... are noted,” An Bord Pleanála said. “The proposed development, as amended by the omission of the energy center would not give rise to any significant adverse local or cumulative impacts in-combination with other developments in the surrounding area.”

Around the same time, Facebook claimed EngineNode had tried to build on lands owned by the social media giant without permission. The social media company operates a data center in Clonee, Co Meath, through its subsidiary Runways Information Services Limited to the south of EngineNode’s planned development. According to An Bord Pleanála, EngineNode’s proposed works included provision of a roundabout and road through RISL lands without permission.