Back in April, Emerson announced plans to spin off its Network Power division as Vertiv, but before it could complete the move Platinum Equity swooped in to pick up the business.

The new owners have decided to continue with the rebrand, as Emerson Network Power is in the middle of becoming Vertiv.

What’s in a name? 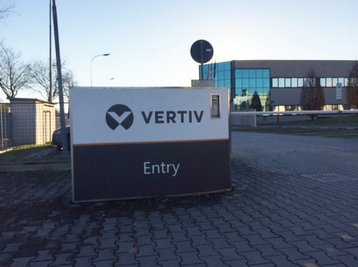 Over the course of this month, and into 2017, Emerson Network Power is transitioning to the Vertiv brand. On November 8-10, the company held a sales event for its EMEA staff to prepare them for the switch.

The final touches on the transition seem to still be underway, with the official Vertiv website working intermittently (Update: It now officially is live, and works).

When the $4 billion acquisition was announced, Platinum Equity’s CEO Tom Gores said: “This is an important investment in a business that will be a cornerstone in our portfolio.

“It plays to our core strengths. In addition to our capital resources, we will deploy our global operations skills to build on the foundation Emerson created and take this business to another level.”

Update: For those wanting more on Vertiv, here’s a corporate video we found on their site.