The appliance nicknamed ‘The Beast’ now offers more than a petabyte of flash per chassis, thanks to data reduction algorithms

Storage expert EMC has updated the XtremIO family of all-flash arrays with a new version of the software platform and a new ‘X-Brick’ – a building block with 40TB of raw flash capacity.

XtremIO 4.0 – nicknamed ‘The Beast’ - includes updates to copy data management services and enhanced support for hybrid cloud and private cloud storage, while the new X-Brick allows building arrays that double the amount of storage in the same footprint. 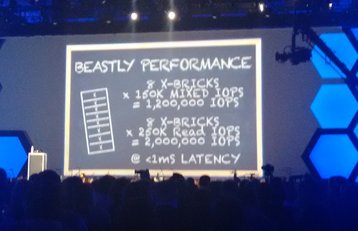 A slide shown during the opening keynote at EMC World 2015

This product was launched just 18 months ago, but according to IDC, has already become the market’s top-selling all-flash storage array, as well as the fastest-selling product in EMC’s history.

The interface itself now includes more historical information and improves on tagging and search capabilities for handling large numbers of provisioned volumes, hosts and snapshots.

The new X-Brick increases the maximum amount of flash storage from 20TB to 40TB in the same 2U form-factor, enabling customers to instantly double the density of their all-flash arrays.

Customers can put up to eight X-Bricks in the same chassis, for a total capacity of 320TB. Add compression and deduplication, and you’re looking at more than a petabyte of flash in a single box.

Both new software and hardware will become available later this quarter.