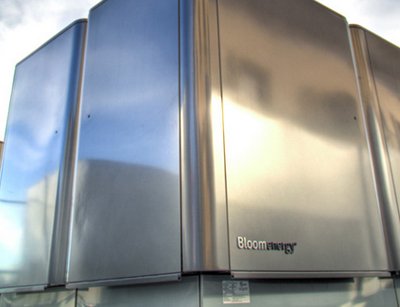 Bloom Energy’s increased focus on the data center industry seems to have worked.

This week it announced it netted one of the most high profile data center clients in the world – eBay – which will use Bloom Energy’s Bloom Box for the powering the next phase of its flagship data center. This follows the announcement that Bloom Energy will also supply its boxes for an Apple data center project.

The installation will be the largest yet of a non-utility fuel cell, with 30 Bloom Boxes to be installed, according to Bloom Energy.

Ebay is no stranger to renewable energy. This will be its fifth such project – it already has a 500kW Bloom fuel cell installation at its San Jose headquarters and a 650kW solar array at its Denver data center. An existing 665kW solar array also captures energy at its Utah facility.

This 6MW project at eBay’s US$334m facility, will also be used to generate 1.75m kWh of electricity a year.

The boxes, which use sand formed into solid ceramic squares coupled with techniques from the semiconductor industry to produce an electrochemical reaction using natural gas or oxygen, will be installed a few hundred meters away from the eBay data center, and will be in use by mid 2013.

EBay President and CEO John Donahoe said the fuel cells will replace the large “and expensive” backup generators and UPS components which are traditionally used less than 1% of the year. Providing a main power sources, they will be running 24 hours a day, 365 days a year.

“We are embracing disruptive technology and designing it into our core data center energy architecture,” Donahoe said.

“Running our data centers primarily on reliable, renewable energy, we intend to shape a future for commerce that is more environmentally sustainable at its core.”

At the time, Gross said: “Bloom Energy’s reliability comes from the fact that now you have a natural gas on hand, and the likelihood of both (onsite natural gas and the utility grid) going down simultaneously is extremely low... The whole thing is built in the factory, tested, commissioned, dropped in place, and the connections to the existing electrical distribution solution are made from there before it is ready to go.”