Nordic data center operator DigiPlex has signed multiple network deals for its Stockholm data center, due to open in January 2016.

A dozen telecoms operators have agreed to connect to the campus site in Upplands Väsby, Stockholm County, first announced in 2014, which will be able to expand to almost 20,000 sq m (220,000 sq ft) of data centre space with a PUE of less than 1.2, and deriving all its power from renewable energy sources. 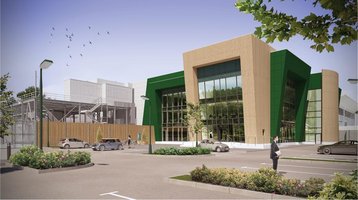 The Nordic countries are a fast growing market for data centers owing to their climate and renewable energy sources. DigiPlex is the largest data center owner and operator in Norway, and this new site will make it one of the largest in Sweden as well.

Fast connectivity is also important, and the new facility will have network connections from Colt, CenturyLink, Verizon, IP-Only, IPC and EU Networks, with dark fiber provided by local operators Stokab and Skanova.

“The fact that so many operators have already chosen to connect to our Stockholm data centre reflects the strong anticipated demand from our customers,” said Gisle M. Eckhoff, CEO of DigiPlex.

Early in 2015, the Nasdaq Group announced it would move its IT infrastructure to the new DigiPlex facility when it is completed, keeping its processing within 20 miles of the Swedish capital.

DigiPlex is also continuing to expand in Norway The company recently opened a new data center in Fetsund just outside Oslo, which has been funded with publicly traded bonds.

Despite the existence of pan-Nordic providers, the region is not homogeneous, and individual countries are jockeying for position. Earlier this year, Sweden’s government was urged to drastically cut the country’s electric power tax, which local data center providers say is causing a potential exodus to Denmark or Sweden where taxes are lower.