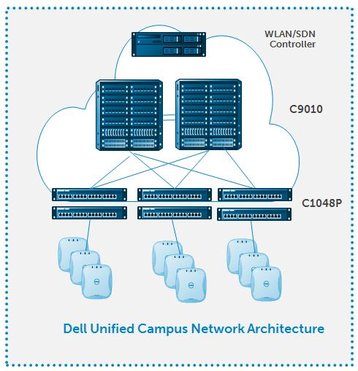 “At Dell, we’re taking a holistic, end-to-end approach to networking from connecting server storage and workloads together in the data center to connecting desktops and mobile devices in the campus,” said Tom Burns, vice president and general manager, Dell Networking and Enterprise Infrastructure. “We’re excited about these new products and capabilities and the new levels of simplicity and flexibility to help our customers become future ready.”

The new architecture is designed for use in mid- to large-scale campus environments looking to improve performance and simplify network management. The architecture provides a single management view for the entire campus from access to core. Dell claims that this single point of control for managing quality of service, policy provisioning and software upgrades. It can also be used a console for programming software-defined attributes. Using industry-standard protocols the new Dell campus architecture can be jumpstarted by re-deploying Dell Networking N-series switches as access nodes. 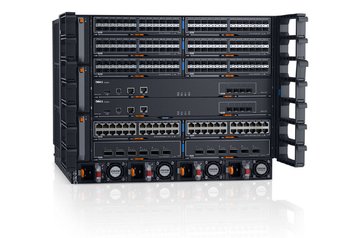 The new Dell Networking C9010 Network Director is a modular switch and is the first platform based on the new Dell campus network architecture. It delivers scalability for up to 4,000 virtual ports managed centrally, support for 10 and 40 gigabit Ethernet (GbE) now, and a tool-free upgrade to 100GbE if needed.

Dell claims that the C9010, when paired with the C1048P Rapid Access Node, will new levels of simplicity and scalability to the campus.

The Dell Networking C1048P is designed to extend the capabilities of the C9010 Network Director by providing enhanced power over Ethernet as well as user access and connectivity back to the C9010.

The C1048P can be deployed either stand-alone or in a stacked configuration, and can be introduced at any time to the new architecture. Dell N-series switches within current customer environments can also become access nodes via a software download shortly.

John Fruehe, senior analyst, Moor Insights & Strategy said: “These products insert new capabilities into a relatively complacent networking market where Dell is using software-defined networking and open networking to challenge the prevailing networking norms. The multi-rate capabilities will give data center customers more opportunity to consider these products and its campus focus will help Dell break into new areas along the edges with minimal disruption, a smart move in a conservative market like networking.”

As the latest addition to the S-Series family of data center switches, the Dell Networking S6100-ON combines multi-rate connectivity with chassis-level modularity and open networking. Through multiple expansion modules, customers can deliver various combinations of port speeds ranging from 10 – 100GbE with both QSFP28 and CXP port choices for flexibility in deployment. The S6100-ON is ideal for virtualization, cloud and big data analytics environments.