Dell EMC is set to launch the newest of its block software defined storage (SDS), ScaleIO.Next. 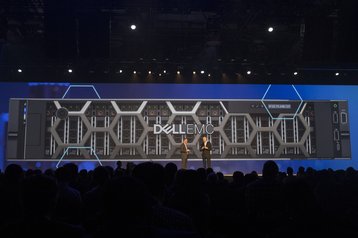 To illustrate the advantages of NvMe, Segal explained that “flash, up until recently was deployed in SAS and SATA.The problem with those protocols is that they were designed for a lower performing type of medium. Now, with the revolution of flash, you need to have a better interface that can exploit the full potential of flash. With SAS you are limited to up to 2.5-3GB/s. With NvMe, I think the number is about 12GB/s. - you can push more bandwidth on NvMe.”

“It allows a better utilization of flash. It’s why we believe it is going to be very successful.”

ScaleIO supports NvMe as well as supporting other interfaces, meaning clients will be given the option of deploying the hardware of their choice.

Amongst these options is ScaleIO Ready Node, a ”preconfigured prevalidated hardware” service which will see ScaleIO deployed oa PowerEdge server, in which Segal states the software will be “optimized.”

Another option is the VXrack X, which is also preconfigured and prevalidated but also comes with network, compute and ScaleIO software. ”This may be the easiest way to consume ScaleIO, next to buying your own hardware.”

ScaleIO.Next will be available by the end of the year.