Keynoting day two of DCD>Zettastructure, the CEO of Litbit showed off his latest artificial intelligence persona, Dac, this time targeted at the data center.

Dac, he hopes, will grow in experience as time goes on, augmenting and improving the humans and machines that work in data centers. 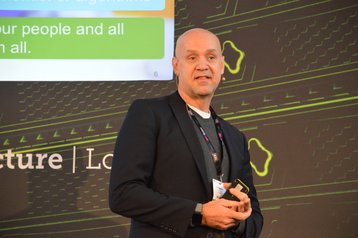 Back in 2012, while head of infrastructure strategy, design and development at Apple, Noteboom traveled to Chengdu, China to plan a massive data center.

“And I remember thinking ’where are we going to get people that have the expertise on electricity, building standards, etc?’ We were in the middle of the countryside,” he said.

“We spent time on technical challenges, building challenges. This was a people challenge - what if I could just clone the best people on my team?”

Noteboom left Apple with a ‘what if,’ he said. A lot of things were in my mind, we had just finished Siri at Apple. So I thought ’What if I could build my own Siri, but with data center expertise. What if I could consolidate all of that expertise from millions of man hours into the back pocket of data center employees?’” 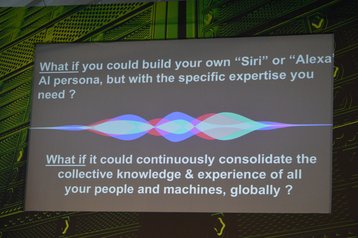 That’s the aim of Dac.

“Dac will help manage data centers. Joe understands data centers, how can Dac be put to work the same day we hire him? Dac needs to be an app, we need to enage with it using a human language,” Noteboom said.

“Text phone call SMS message. Why should we teach people to speak code when the cloud has become the commodity.”

Noteboom was cagey about the actual current intelligence level of Dac, but said that “a couple of our early customers have been helping on this,” and that the AI persona has over 11,000 pieces of innate knowledge in built at present. 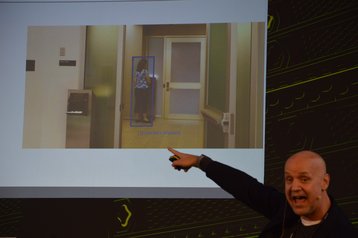 He took the audience through several examples of what Dac can do, including on the physical security level - “as a manager of Dac I can create tasks, including letting security know that there’s somebody in the lobby.”

Or, “if you see a person on the ground, because somebody has climbed a ladder and fallen, Dac’s very good at that. It has an innate knowledge of what horizontal people look like.”

“Dac can recognize guns,” he added.

Noteboom also promised some more data center specific features if you augment it with the right hardware, such as microphones, thermal cameras and accelerometers, much of which can be found in a smartphone.

“Dac has an incredibly good knowledge of sound and vibration of machines in a data center,” Noteboom claimed.

“It understands the difference between a normal operating machine and a failing machine - a grinding noise, a slapping noise.

“One of our customers [presumably not in the data center space], had had 60 failures of UPSes over the past 70 years that cost hundreds of thousands of dollars over the year and caused physical destruction and also caused millions of dollars of outage.

With the right vibration sensing equipment, Litbit have “taught Dac to recognize vibration patterns that are not good specifically to HDD I/O.

With microphones, Dac can have ‘super hearing,’ but Noteboom admitted the company had yet to find much use for that skill in the data center space.

“The most useful was in the pharmaceutical vivarium space, where they’re listening to stress squeals of lab mice and are able to detect them when humans can’t hear them. Pretty interesting.”

Litbit has yet to reveal any of Dac’s early customers, and a lot of the product was still left to the imagination. Noteboom hopes for a system that “doesn’t sleep, is always on duty, that speaks every language,” that can act as the ultimate clone of his employees, but whether it can live up to that challenge remains to be seen.

Noteboom may have come up with the idea in the early days of Siri, when it was hoped that it too would revolutionize the world as an AI personal assistant, but it - like Siri - still remains a promising idea set in a future that has yet to come.

For more on the current state of artificial intelligence in the data center, be sure to read the latest issue of DCD Magazine, which talks to over a dozen experts in the field about what’s happening right now.