Microsoft has open-sourced another set of blueprints for hyperscale server hardware. This time, they are - intentionally - only halfway finished.

Project Olympus was designed in collaboration with the Open Compute Project (OCP). It is not just a server ecosystem, but a new hardware development model that encourages wider community participation in the early design stages, heavily inspired by development methods used in open source software.

In accordance with this notion, Project Olympus is just 50 percent complete, with the rest of the work expected to take place over the next eight months.

The announcement will be explored in detail at the DatacenterDynamics Zettastructure conference in London, which will also host the first demonstration of the hardware. 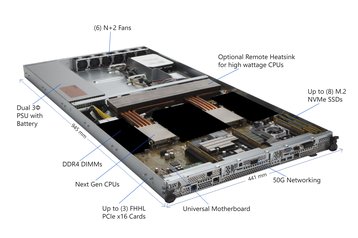 Microsoft has been steadily increasing its participation in open source initiatives, having joined OCP in 2014. Through the non-profit, the company has been sharing designs of servers used in the data centers that power Azure, as well as some more unusual ideas, like the notion that lead-acid UPS battery banks could be replaced by small Li-Ion cells distributed throughout the racks.

Microsoft is also a huge buyer of OCP hardware, with more than 90 percent of the servers it procures today being based on OCP-contributed specifications.

According to Microsoft, the current open hardware development model lack agility, since it requires designs that are production-ready. This prevents third-party contributions from making it into vendor designs, delays the development of derivatives and limits community engagement and adoption. 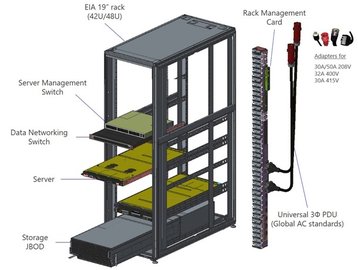 With Project Olympus, Microsoft proposes an alternative: open hardware designs are donated to the community when they are approximately 50 percent complete - much earlier in the cycle than any previous OCP project.

The idea is to permit community members to contribute to the ecosystem by downloading, modifying, and forking the hardware design just like developers do with open source code. Microsoft hopes this will result in increased productivity in the industry and faster delivery of new capabilities via the cloud.

“Microsoft is opening the door to a new era of open source hardware development. Project Olympus, the re-imagined collaboration model and the way they’re bringing it to market, is unprecedented in the history of OCP and open source datacenter hardware,” said Bill Carter, Chief Technology Officer, Open Compute Project Foundation.

Over the next two days, Microsoft will share more details about Project Olympus as part of the Datacenter Dynamics: Zettastructure program, including a keynote, OCP workshop and hardware demos.