DCD Converged: ARM is finally arriving to the data center 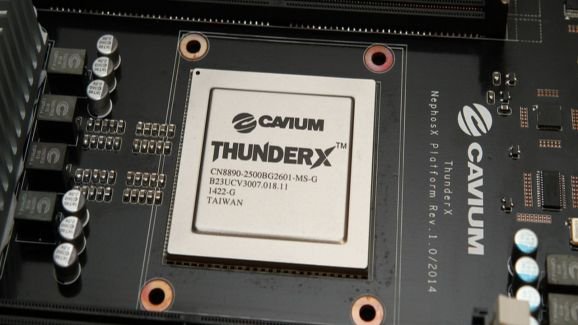 He says this is an area where ARM has a distinct advantage. Intel makes its own silicon, and this year it hopes to ship 30 custom versions of its latest Xeon processor to large customers like Ebay or Amazon.

Meanwhile ARM licenses its designs to more than 300 third-party silicon vendors, each developing their own version to fit every possible use case – this means you don’t have to be the size of Facebook to enjoy the benefits of workload-specific servers.

While speaking at the DCD Converged conference in London, Ronco admitted that the advent of ARM in the data center had been delayed, but said he was sure we would see lots more activity in 2015.

ARM wrestling
According to Ronco, server specialization and flexibility of the network is on the increase – and this means different workloads can be directed to the most appropriate hardware. Some applications require more compute, while others need more memory bandwidth or storage I/O. Some would benefit from Digital Signal Processing (DSP) functionality, while others would prefer a Field-Programmable Gate Array (FPGA).

ARM thinks its partners will be able to build pretty much any combination of chip features and components imaginable, as long as there are customers to use it.

“Fundamentally, it’s about the ARM business model,” explained Ronco. “Yes, we’re known for low-power, and we will always do our low-power devices because that’s in our DNA. But the real benefit that you get from having an ARM solution is by having many different vendors doing different solutions that are tailored to different needs.

“The key point is that all of these solutions are using the same instruction set, so [they are] compatible with the same software and enable people to mix and match different solutions from different vendors.”

Examples of existing ARM chips bound for the data center include the X-Gene SoC from Applied Micro, AMD’s Opteron A1100 (codenamed ‘Seattle’), and Cavium’s ThunderX.

“One size does not fit all. What you will see is different ARM cores for addressing different parts of the market,” said Ronco. “We have silicon vendors that are doing pretty low-end servers, we have vendors who are doing very high-end servers."

To prove this point, he brought up the partnership between ARM and venerable supercomputer manufacturer Cray. Earlier this week at SC14, Cray said it is evaluating ‘alternative’ processor designs, including the use of 64-bit ARM technologies for its systems. The company is already working with Cavium to deliver HPC clusters based on a 48-core workload-optimized ThunderX.

Meanwhile Qualcomm has just confirmed it is building its own ARM-based server silicon, expected to launch by the end of 2015. Even Microsoft is rumoured to be developing a Windows Server version for ARM, although it hasn’t decided whether to make it commercially available.

“We’re just at the beginning of the ARM 64-bit story,” concluded Ronco. “It is real and it is happening. I think 2015 is going to be a really interesting time in terms of trial deployments and ramp-ups. We are very excited about it.”