DCD Colo + Cloud: the end of the world?

The data center industry is heading for crisis, as demand continues to outstrip what can be provided, the DCD Colo+Cloud event in Dallas Texas heard today.

Data centers are being built which cannot deliver the densities required of them, and the growth of storage is unimaginable, Jakob Carnemark, CEO of Aligned Energy, told the event. At the same time, customers are buying more colocation data center space than they need, and then running it at low utilization. 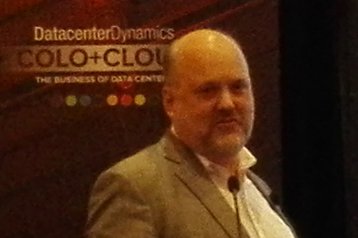 “The industry is provisioning 17 data centers for every one that is actually needed,” said Carnemark, coupling a 30 percent utilization of servers, with an over-buying and sparse population of space that is acquired. ”I truly do believe it’s the end of the world as we know it. There is no way we can support the current level of demand with today’s low level of utilization.”

The webscale providers are improving massively on those figures, mostly because of higher levels of utilization. Meanwhile enterprise users are improving but not as fast. “Eventually [the enterprise] will have to ask yourselves if you can live with that level of disadvantage,” he said.

Aligned Energy has built a $300 million data center in Plano, a suburb of Dallas, which aims to address the issue by providing space, cooling and power on a pay-per-use basis. The Aligned Data Centers facility relies on innovative “distributed cooling” that uses the same refrigerant as a CRAH unit, but circulates it into the data center space, through the heat exchangers above the racks.

This localized cooling allows the company to scale its infrastructure, so it does not have to overbuild, and customers can only pay for what they use, Aligned staff told DatacenterDynamics during a tour of the Plano data center.

At the DCD Colo+Cloud event, session chair Roger Strukhoff of the Tau Institute reassured the audience: “The good news is that data is growing, and you’re the bottleneck.”