Locals concerned about projects all over the county

Developers have been granted rezoning and special use permits to build a new data center campus in Prince William County, Virginia.

Prince William County supervisors this week approved the requests, paving the way for the I-66 and US 29 Technology Park. The 100-acre site outside Gainesville could see up to six data center buildings and a substation built on the site in Northern Virginia. 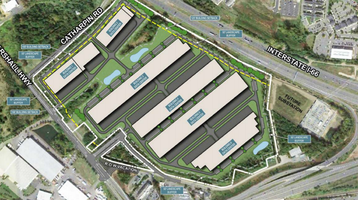 The project was first proposed in July; the property is owned by Southview 66 LLC and Gainesville JM LC, and US real estate development firm Lerner is the developer on the project. No end-user has reportedly been signed onto the project yet.

County supervisors voted 6-2 to approve a rezoning and special use permit for the I-66 and Route 29 Technology Park.

The project is one of three in the works in the same area between Gainesville and Haymarket. In June the board approved Village Place Technology Park, a one million square foot data center project on a 45-acre property. Another 22-acre data center complex is reportedly also planned but has not yet reached the board. All three are located outside the county’s Data Center Opportunity Overlay District.

The Prince Williams Times reports that local energy firm Dominion Energy thinks this new data center cluster at John Marshall Highway and Catharpin is ‘is leading towards what is seeming to be needing new infrastructure.’

Southview 66 LLC has agreed to abandon developing the property for data centers if Dominion Energy determines the data centers would require the construction of new above-ground transmission lines west of the property, in the vicinity of Haymarket. The assurance does not preclude an additional line coming from the east, however.

AWS has previously faced protests from locals over new power transmission lines for its data centers in the area.

“It’s unfair to put the community through this again,” Elena Schlossberg-Kunkel, executive director of The Coalition to Protect PWC, said during a public hearing that preceded the board’s vote.

“Haymarket and Gainesville are being engulfed with data centers, transmission lines, and substations,” added the Coalition’s Karen Sheehan.

The war for Manassas Battlefield

The proposed ‘PW Digital Gateway’ could see hundreds of acres of land on Pageland Lane redesignated under the local plan to allow for the construction of up to 27.6 million square feet of data centers.

PW Times reports that Manassas National Battlefield Park’s superintendent Brandon Bies has written two letters to the Prince William Board of County Supervisors and the county planning office outlining the park’s “grave concerns” over the proposal around its potential historical, environmental, and viewshed impacts, saying the plans could cause “potential irreparable harm” to the park.

“Manassas National Battlefield Park strongly opposes this CPA (Comprehensive Plan Amendment) because it is certain to have a substantial negative impact on historic resources both within and outside of the park that are significant to the battle,” Bies wrote. “Changing the planned land use of these areas would inhibit the mission of the Park to preserve and honor the sacrifices of the 4,000 Americans who died at Manassas.”

The park is the site of two American Civil War battles; the first and second Battles of Bull Run in 1861 and 1862 respectively. Both were won by the Confederates, with almost 4,000 soldiers killed and more than 16,000 injured across the two conflicts. Today the park totals more than 5,000 acres and is visited by over 700,000 people every year.

In his letters, Bies noted previous proposals pitched in the 1980s and 1990s that threatened the park: a 550-acre shopping mall proposal in 1988 known as the “William Center” and the Walt Disney Company’s plan to construct a “Disney’s America” theme park about three miles west of the park. Both proposals saw resistance from locals before being voted down by county officials.

“In both of these cases, the board of county supervisors was attracted by the lure of tax revenue promised by these developments. The same can certainly be said about the current proposal for a 2,133-acre data center corridor along Pageland Lane. But just as was the case in 1988 and 1993, this proposal is extremely concerning to the National Park Service,” Bies said.