But the chips inside it have yet to be decided

Installed at Lawrence Livermore National Laboratory's B453 Simulation Facility, the Department of Energy supercomputer will be more powerful than the current Top 100 fastest supercomputers in the world, combined - with a peak performance of 1.5 exaflops (1.5 quintillion calculations per second).

It is expected to be delivered in late 2022, and run classified nuclear weapons simulations from 2023.

The power of the system

Shasta will be used in the DOE's other two upcoming exascale supercomputers, Aurora and Frontier. With those systems featuring Intel and AMD hardware respectively, what will El Capitan use?

Unusually, that has yet to be decided. As the "Shasta hardware and software architectures can accommodate a wide variety of processors and accelerators," Cray and Lawrence Livermore are able to take their time on deciding which hardware to use, Pete Ungaro, president and CEO of Cray, said in a pre-briefing attended by DCD. 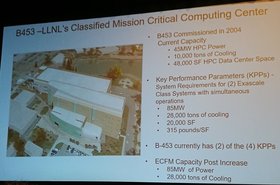 "The El Capitan system procurement was written in such a way that the Livermore team, working with us at Cray, can make a late binding decision on the node architecture of choice. There's lots of different options, and that part of the market is changing very rapidly between the different CPUs and GPUs that are available."

While those specifics are yet to be decided, the overall contract is worth $600m and the system is expected to be at least four times more energy efficient than LLNL's Sierra supercomputer, the second fastest in the world.

Sierra is currently being used for nuclear weapons simulation, but while the system was still being set up it was opened up to DOE scientists for unclassified problems, including efforts to cure cancer.

A similar thing will happen with El Capitan, LLNL director Bill Goldstein told DCD: "That period is used to shake out the machine to make sure that we discover any issues that have to be resolved. That is a prime period for us to work on scientific problems that can't be addressed at any other scale."

To ensure that work can begin immediately on El Capitan once it is live, a Center of Excellence will be established in collaboration with Cray to port and optimize existing codes to run on the exascale system.

The power of the atom

The supercomputer "will combine artificial intelligence and machine learning with modeling and simulation to create a cognitive simulation capability," Lisa E. Gordon-Hagerty, DOE under secretary for Nuclear Security and NNSA administrator, said in the pre-briefing.

Goldstein added: "Our nuclear weapons were developed, and thus far maintained, using 2D simulations. Our computers have not been powerful enough to handle the third dimension with enough speed, and enough accuracy.

"The lack of 3D has introduced inaccuracies and uncertainties into our work that we can no longer be satisfied with. We'd like to say that, while the stockpile was designed in 2D, it's actually aging in three. El Capitan will permit faster, more detailed 3D modeling and simulations, reducing the time needed for the most complex calculations. And most importantly, El Capitan should make simulations in 3D as routine as they currently are in 2D.

The NNSA is "currently redesigning both the warhead and delivery system," Goldstein said, for the first time in "about 30 years now."

With new systems, an aging stockpile, and a ban on tests, El Capitan will prove crucial for the US' deterrent, Goldstein argued.

The US recently leveled sanctions against Chinese supercomputer companies allegedly supplying China's nuclear weapons simulation labs. This is not new - in 2015, the US Department of Commerce banned US companies from selling Xeon and Xeon Phi CPUs to China's leading national laboratories, claiming the chips were being used to build systems that simulated "nuclear explosive activities," presenting a national security threat.