Ipswich Borough Council is planning to demolish a former BT data center, and develop the site into housing.

The site, in Ipswich Suffolk (about 80 miles from London), currently holds a five-story office building and a two-story data center, both of which have been empty since 2015. The planning proposal would demolish the data center and build housing, while converting the office space into flats. 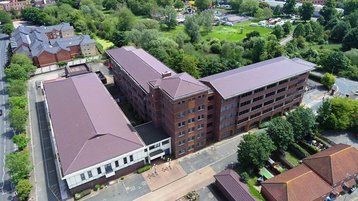 IBA proposes to demolish the data center to the left, and redevelop the office building to the right – Archant

The 4.3 acre site on Bibb Way is 1km from the center of Ipswich, and was bought by Ipswich Borough Assets, the commercial arm of Ipswich Council for £4.1 million ($5.7m). Unusually, IBA does not plan to include a data center in the new development: instead, it will convert the office building into 78 flats in a £10.5 million ($14.5m) development, while demolishing the data center.

A row of homes along Handford Road would be built to replace the data center, alongside further housing on the former car park, totaling 72 homes, bringing the total to 150 homes.

The proposed development will take place in three phases. Phase 1 would demolish the data center and convert the office building into flats, and then Phase 2 would build 24 flats and 15 houses on the data center site, with access onto Handford Road.

Finally, Phase 3 would develop the former car park in the southwest part of the site, into 17 flats and 16 houses, with associated parking and amenities.

The plan promises that all the housing will be affordable - rented at 20 percent below local market rents - and that a mechanism will ensure it stays affordable. The newly-built housing will be two or three stories tall.

An archaeological survey has found no significant known finds in the site, and an ecological survey found there are bats roosting in the office building, which need to be dealt with appropriately.