The aim of Torus is to give developers access to a reliable and scalable storage system for applications that run on containers managed by Kubernetes, the open source container system promoted by Google. 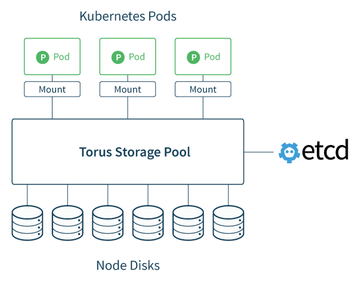 Released today on Github, Torus sets out to solve the issue of persistent storage in container cluster infrastructure - where developers have struggled to store application data across containers. The system uses CoreOS’ etcd “to shepherd metadata and maintain consensus. This frees Torus itself to focus on novel solutions to the storage part of the equation,” said CoreOS software developers Barak Michener in a blog post.

Other approaches to the storage problem exist, such as Red Hat’s Ceph, Hadoop-focused MapR and even Cisco’s hardware-based storage solution. But Torus is a fully software-based take on the issue that can, at least to a prototype level, provide persistent storage for containerized apps.

“We have seen a clear need from the market for a storage solution that addresses the dynamic nature of containerized applications and can take advantage of the rapidly evolving storage hardware landscape. We’re excited to see CoreOS lead the community in releasing Torus as the first truly distributed storage solution for cloud-native applications,” Zachary Smith, CEO of bare metal cloud provider Packet, said.

With Torus written in Google’s Go programming language, Peter Bourgon, distributed systems engineer and creator of Go kit, said: “Distributed storage has historically been an elusive problem for cloud-native applications. I’m really happy with what I’ve seen so far from Torus, and quite excited to see where CoreOS and the community take it from here!”

CoreOS says that Torus is still in its early stages, but hopes to add new features, such as object storage, soon - with the help of the open source community, that is.