Following the introduction of generous tax breaks in 2017

The City of Shelby in Montana has identified 10 parcels of land that could serve as suitable locations for data centers.

All sites have a reliable power supply and access to connectivity from Tier I providers. The city highlights that any sufficiently large project would also benefit from property tax breaks approved by the State of Montana last year. 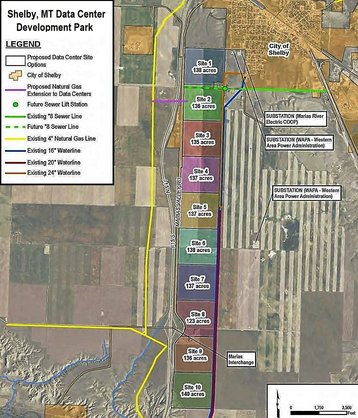 Wish you were here

In 2017, Montana passed a package of tax incentives aimed at potential data center developers. These included a new ‘class seventeen’ property tax classification for qualified data centers - in this instance, facilities that comprise at least 300,000 square feet and have invested at least $150 million in land and infrastructure.

Class seventeen properties are taxed at 0.9 percent of its market value, for a period of 15 years from the start of construction.

The new initiative, launched by the Port of Northern Montana and supported by the City of Shelby, has identified and zoned 10 sites for potential data center projects in the state, at around 140 acres each.

These sites are located on the outskirts of the city and in close proximity to two electric sub-stations, served by two different utility providers. They offer a choice of network connectivity providers, including CenturyLink and Zayo, water supply, access to sewers and a proposed connection to a natural gas pipeline, suggesting potential for on-site power generation.

According to research published in May 2017, average new data center construction in Shelby is estimated at $1,300 to $2,000 per square foot, including “construction, infrastructure, computer servers and other ancillary costs.”