A new purpose-built data center is available for lease in San Francisco, California.

CIM Group and JLL are listing 400 Paul Avenue in the Bayview area of the city as available for lease. The facility is a 24MW, 182,250 sq ft two-story powered shell sitting on 7.3 acres and two office buildings. 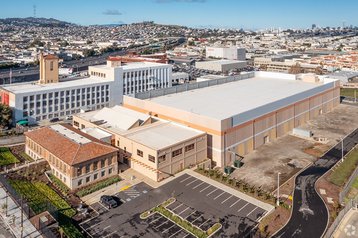 Later in the listing it is confirmed that the site has 12MW of electrified utility connection, with an additional 12MW utility feed committed by PG&E. There are currently five generators on-site for a total of 10MW. The project has been approved for up to 18 generators totaling 36MW of back-up power.

Plans for a facility at 400 Paul were first announced in 2017 as a joint project between Fifteenfortyseven Critical Systems Realty (1547 CSR) and CIM Group. The companies bought the land from Cambay Group and were due to break ground that year. The facility was completed last year; JLL has confirmed to DCD the site is currently on the market.

CIM and JLL are calling the facility the first purpose-built data center project constructed in the city of San Francisco in more than 10 years. Previous land owners Cambay Group had been planning to develop a data center on the site since at least 2011.

400 Paul is located next to 200 Paul, a Digital Realty-owned carrier hotel.

According to San Francisco documents, the site was originally constructed in 1930 by the Link‐Belt Company, which purchased the property from the San Francisco Sulfur Company, and built its first west coast manufacturing facility there.

In 1973, the Link Belt Company sold the property to Jerome and Jeanne Pothoff [later acquired by Sonoco Products], which used it for their packaging containers and manufacturing company, Tubes and Cores, until 2001. During the intervening years, 320 and 350 Paul Avenue were used for a variety of uses including clothing manufacturing (the Eber Company) and an automobile storage (Pat’s Garage) until the Cambay Group purchased the entire site in 2001.

While the office building at 320 Paul has been retained and refurbished, the old warehouse at 400 Paul was demolished and rebuilt.