Update: This article was published in 2013. The new world’s most powerful computer is the Sunway TaihuLight supercomputer, also based in China, but built on Chinese-designed chips. For the full lowdown, go here.

The Tianhe-2 supercomputer at a Chinese university earned the title of the world’s fastest computer second time in a row on the November 2013 Top500 list, announced Monday at the supercomputing industry’s SC13 conference in Denver, Colorado.

The system also topped the June 2013 list. Compiled by experts at US and German universities and from one of the US Department of Energy’s (DoE’s) laboratories, the list comes out twice a year, ranking 500 supercomputing systems based on their LINPACK performance. LINPACK is a software package for crunching algebraic equations and other problems. 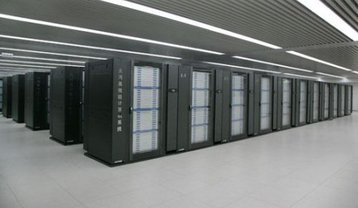 The second system on the list, a cluster called Titan at the US DoE’s Oak Ridge National Laboratory, is powered by Intel’s biggest competitor in the server-processor space AMD. The 560,640-core system, built by Cray, runs on AMD’s Opteron 6274 processors and NVIDIA K20x GPUs. Titan was second on the June list as well.

Both Xeon Phi chips and NVIDIA GPUs act as coprocessors in the respective systems. Coprocessors are widely used in supercomputer architectures to offload tasks from the main CPUs to accelerate performance.

Xeon Phi processors are also used in Stampede, the supercomputer at University of Texas, Austin, that was seventh on the list. NVIDIA GPUs accelerate the sixth system on the list, called Piz Daint. This Cray system, running at the Swiss National Supercomputing Center in Lugano, Switzerland, is a newcomer to the top-10, where it is also the most energy efficient one.

The number of systems on the list whose performance is greater than a petaflop per second has increased by five since June, reaching 31.

More than half of all systems on November’s Top500 are deployed in the US (265). Europe has 102 and Asia has 115 top-performing supercomputers.

China and Japan dominate among Asian countries, with 63 and 28 supercomputers, respectively. In Europe, UK, France and Germany are fairly close to each other with 23, 22 and 20 systems on the list, respectively.