A video animation on the company's site shows a "Vortex Vacuum Chamber" in which cold air is sucked into a bell-shaped chamber containing a cylindrical arrangement of server boards. After cooling the servers, the heated air leaves the chamber, apparently driving a turbine on the way out, to generate power. The servers shown appear to be GPU engines, which the company says will be supporting high performance computing, video gaming, and crypto mining. 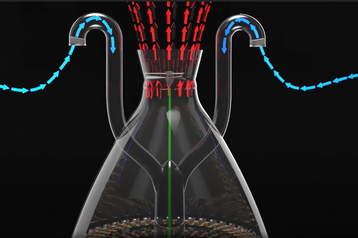 Update: DCD has received some comments from Infinidium CEO Paul Grist, included below.

Infinidium's site says it is "a private Canadian Company developing the world’s most efficient data center infrastructure while providing inexpensive high-performance computing services on the cloud with lowest environmental impact available in a rapidly growing marketplace."

Alongside the cooling system, the site promises cheap "Cloud Servers", offering GPUs at $0.20 per hour per unit or $4.50 per day. The tech specs are identical to those shown for the Nvidia GeForce RTX 2070 Super on other sites. Infinidium also promises to develop a "distributed computing platform" allowing users to buy and sell capacity on Nvidia GPU servers, giving Infinidium a 20 percent cut.

The company's video, posted on YouTube two years ago by Infinidium CEO Paul Grist, shows a cylindrical arrangement of servers, which Infinidium says will be powered through a DC "nanogrid" (not shown) which requires no electrical conversion and includes decentralized active battery storage.

The video describes the technology as "biomimicry" and promises it can "eliminate complex cooling infrastructure, along with generators and other auxiliary equipment", and can be retrofitted to existing sites.

Infinidium Power was founded in 2018 as Infinidium Blockchain Power by Grist, who previously was president of Archon Energy, a California-based renewable energy startup with a minimal web presence that appears to have proposed a wave energy project.

Others listed on the site include Chad Mayer, COO, a Calgary construction industry executive, lawyer Bill DeJong, and Dana Jurika, a mining and finance executive.

Update: "Our system has been developed with a prototype model and further computer modeling and analysis done by AeroEnergy Consulting that confirm the concept's viability," said Grist in an email to DCD. "We are building a commercial demonstration for HPC, AI, Machine learning and crypto mining applications with Nvidia components. We plan be operational by late summer 2022 and will create a new benchmark for data center efficiency.

"We are working with a Scientific Provincial Government Grant program that will enable major Federal Grants for our expansions.

"There are several trade secrets/enhancements we are maintaining confidential - however, the system is relatively simple based on the fact that hot air rises and cold sinks."