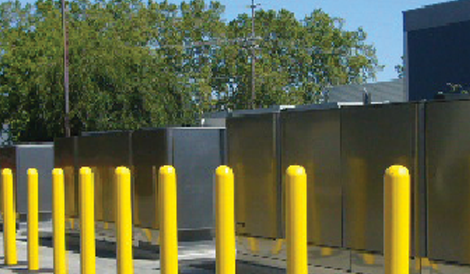 Last month, CenturyLink said a Californian data center in Irvine operated by Savvis will use Bloom Energy fuel cells to generate up to 500kW of clean power starting sometime in the first half of 2014. Bloom Energy Servers will provide it with primary power, offering, it said, a way of reducing risk from electrical outage from the electrical grid.

It is just the latest deployment in Silicon Valley of the technology. NTT America was the first colo provider to use its fuel cells, installing five of Bloom’s first-generation 100kW boxes at its San Jose data center in 2011. It is a move that has so far paid off, according to Nael Younes, NTT America director of facilities engineering – West.

FOCUS visited the facility a few months back, at which time regular maintenance was being carried out on fuel modules inside the boxes. Younes proudly pointed out the shiny silver cubes placed outside the large facility, where they provide power in parallel with the utility. He also pointed out NTT’s Silicon Valley post code, which makes using a Bloom Box economically beneficial.

Bloom – a recap
Bloom Energy has been covered in depth since it first came to market with the Bloom Energy Server – or Bloom Box – in 2010. It says its solid oxide fuel cell technology produces clean, affordable electricity on the customer’s site.

Since then the company has taken significant steps to target the energy-hungry data center market, employing ex-founder of EYP Mission Critical Facilities Peter Gross to set up a mission-critical arm of the business that is now pitching the boxes as an alternative to grid power – with utilities being used only for back-up. Younes says such an option for a colo provider such as NTT would not be viable at the present time due to the conservative nature of colo customers. Bloom, however, has helped NTT push its green message and satisfy its thirst for R&D and at the same time brought about cost savings.

NTT’s Silicon Valley data center, built in 2000, is often used as a testbed for new technologies – part of this is down to its proximity to the innovative Silicon Valley tech players.

“We also have a lot of space here,” Younes says. “We have a big parking lot. This building was built to house two software companies and we just combined them together.”

Part of the criticism raised regarding the Bloom Boxes has been their size, but in recent times it has packed more into each box, releasing a 200kW model in the same footprint; nevertheless, data centers do need to have extra room to accommodate them.

The location benefits stem beyond space at the facility. Younes says the State of California rewards companies using technologies that save energy from the grid. “California gives you rebates for each unit you install. This pays for a significant portion of the cost of these units that we get fully maintained as part of their price for ten years,” he explains.

There are also the cost savings that come from operating in a region where power prices are high. In the summer, rates can be as high as 11c to 15c per kWh of electricity, and 3c to 8c per kWh of gas, which is higher than on the US East Coast. NTT compensates for its use of gas by contracting with a provider that pumps biogas into the grid.

Bloom claims collectively the fuel cells provide about 500kW capacity – or 4.2m kW a year – but Younes says losses of about 10% do come about during the conversion process. But this does not affect the bottom line.

As Younes says, these boxes are not for everyone. He estimates that without the rebates California offers it could add ten years to the return on investment. “And they are only made to last for ten years.”

NTT’s Japan office, however, is always interested in testing new ideas. “NTT as a company prides itself on R&D and puts millions into new ideas,” Younes says.

“People don’t realize that if you invest in some of these efficiency measures, you can save a lot of money in the long run, not only on utility power but on preparations.” But the heart of NTT’s San Jose operation is colo, and that means the Bloom Box won’t be replacing utility feeds any time soon.