Crusoe gets another 10MW of portable mining rigs

Colorado-based Crusoe Energy has bought up Great American Mining, a rival in the business of Bitcoin mining powered by waste gas at oil wells.

Crusoe places mobile data centers at oil wells where they are powered by natural gas which would normally be burnt off in "flares". It has acquired all the assets of GAM and will integrate them with its own activities, adding some 10MW of capacity and 4,000 ASIC mining rigs, as well as relationships with oil companies in North Dakota and Montana. 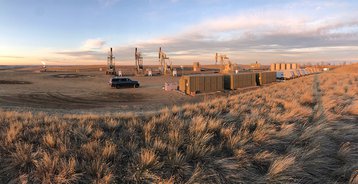 Crusoe says this will add some nine percent to its capacity, taking its total fleet of mobile gas-fired data centers to approximately 125.

Crusoe was founded in 2018, and raised $128 million in 2021 to expand its business, which now has more than 98 container-based data centers sitting at oil wells in North Dakota and Montana. These mostly mine for Bitcoin and other cryptocurrency, although Crusoe has launched a cloud service. Crusoe gathered a further $500 million this year, led by green fund G2 which justified its investment in the gas-burning company on the basis that the "Digital Flare Mitigation" services reduces methane emissions by burning gas more efficiently.

It also has investment from Oman and Abu Dhabi, with plans to expand to Middle East oil fields

Crusoe will take over its smaller rival, turning GAM's factory in Ponchatoula, LA into a research and development (R&D) facility, adding 24 specialized GAM employees to its workforce of around 275.

GAM has been operating since 2019. describing its "gas-to-hash" service as "bringing the market to the molecule". Its website says all hashrate computation should be mobile, moving to where energy is stranded: "Underutilized, stranded, and otherwise wasted energy exists throughout the world. Large amounts of energy are required for mining Bitcoin. This is part of the trust-less design of Bitcoin's incentives for honest behavior. Bitcoin is freedom money, and Bitcoin mining is a great way to 'spend' this wasted energy."

Crusoe CEO Chase Lochmiller said: “We value the relationships established by Great American Mining with oil and gas producers in the Bakken oil fields, and look forward to developing these relationships to enhance and expand DFM operations wherever flaring may be a challenge.

GAM CEO Todd Garland said: “Our belief at Great American Mining is that bitcoin mining is an important solution to stranded gas and flaring problems - problems that have frustrated the oil and gas industry’s efforts to improve environmental performance and efficient use of Earth’s natural resources for decades. Crusoe is a trailblazing company that successfully pioneered and scaled large-format Digital Flare Mitigation technology and operations. They are the clear leader in the space and I believe Crusoe is best positioned to take our combined business to the next level.”

While flare mitigation increases the amount of energy extracted from existing oil wells, the Intergovernmental Panel on Climate Change (IPCC) has made clear the world's priority should be to stop extracting oil, as an urgent priority to stave off climate catastrophe. UN Secretary General Antonio Guterres has called fossil fuels a "dead end", and warned that fossil companies "have humanity by the throat".