Vapor IO may be one step closer to deploying a nationwide network of edge data centers after securing a third funding round, led by Berkshire Partners - not to be confused with Berkshire Hathaway - and backed by long time investor and telecoms operator Crown Castle.

The investment will allow Vapor IO to expand its so-called Kinetic Edge business, to offer colocation, interconnection and software defined networking in its own multi-tenant edge modules - containing Vapor's cylindrical chambers, overlaid with its own software - at the edge of the network. 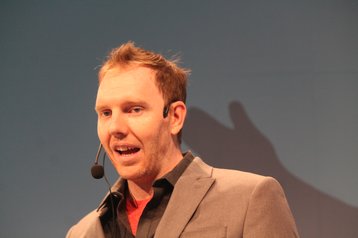 The company has so far deployed three of its edge modules as part of a pilot in Chicago. Another two have received planning permission and a total of 13 are scheduled to be brought online before the end of 2018, Crawford said in an interview with DCD.

The company has also bought Project Volutus, the data center service platform which Crawford says will enable networks of edge data centers to function as high-availability regions – up to twelve nines of availability – at the base of cell towers, launched last year in partnership with Crown Castle. The company's proof of concept module won DCD's Living at the Edge award last year.

Taking ownership of Volutus, Crawford said, was the company’s response to both customers’ and potential customers’ request to deal with Vapor IO as their data center operator.

"We kept on getting requests from corporations saying 'actually we need one hand to hold as we deploy this out, and you running in the back end as an MSP [managed service provider] it can make our lives more difficult.' So we sat down with Crown who was a current investor, we sat down with other potential investors and other new economy companies - big social networking companies, big content delivery companies - and said: 'How would how would you like to procure services from Vapor?' And they said 'look, what the world needs is an edge colocation company that is capable of actually building and delivering on services, and that's you guys.'"

Another factor in the decision to buy back Volutus, he said, was the added flexibility and freedom to make its own decisions: "We wanted to be able to control our own destiny. Vapor wanted to be in a position to build where we need to build and go where we need to go to support our customers and hit that go button very quickly."

"You have to imagine any multi-billion dollar account - roughly $60 billion enterprise company - there are checks built into the process of getting procured and provisioned; we wanted to be really agile, be really nimble and that that means deploying our own capital," he added.

"So to be clear: We love Crown Castle's assets, we love their fiber, we love their towers, we love their rooftop rights, we love the small cell deployments. Everything that they do fits perfectly into this. We just wanted to be in a position to control our own destiny and be able to work first hand with the new economy companies, the spectrum owners and the telcos on their deployment plans - bypassing weeks or months' worth of procurement processes with Crown."

Though the Kinetic Edge isn't officially exclusive to Crown Castle infrastructure, the company would prefer to deal with the operator where possible. This should pose little difficulty, given that Crown Castle owns more than 45,000 cell towers and 65,000 fiber route miles across the US.

Another feature being reintroduced by Vapor is Synse, an open source platform - formerly known as Open DCRE - for data center telemetry and cloud monitoring. When it was first rolled out in 2015, it was the first contribution to the OCP Foundation accepted on a reciprocal license, ensuring that forks and branches wouldn’t be created.

Though Crawford declined to disclose the detail of the company's customers, potential customers and the locations of its planned deployments, he promised: "The next time we talk, we will get into specifics about who we're rolling out with."

In the latest issue of DCD Magazine, we explored the edge - from what the word means to what the edge could mean for you. Sign up today to read the issue for free.