Installation will expand opportunities to communicate with and monitor spacecrafts

Azercosmos and Leaf Space have announced the installation of a ground station at Azercosmos’ Main Ground Control Station in Baku, Azerbaijan, as part of a new partnership.

Announced this week, a new 3.7-meter S/X-band terrestrial antenna will further enable communication with and monitoring of spacecrafts, including critical data processing, transmission, telemetry, and control between satellite networks.

Azercosmos’ Main Ground Control Station is located in the Baku region of the Absheron Peninsula, and previously housed a 5.5m S/X-Band antenna system and a compact network infrastructure. As a universal ground station, it enables a real-time transmission environment for satellites in low earth orbit and has the capacity to provide services to all global satellite operators. 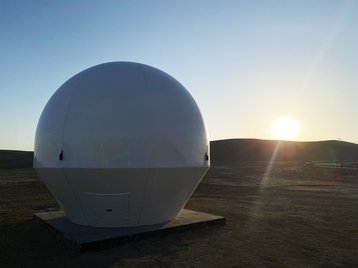 Azercosmos is the Space Agency of the Republic of Azerbaijan and is the first satellite operator in the Caucasus region entirely owned by the Government of Azerbaijan. The agency currently operates two telecommunication satellites, Azerspace-1 and Azerspace-2, and one Earth Observation (Azersky) satellite.

The partnership with Leaf Space, an Italy-based provider of ground segment as-a-service, will help support the agency throughout the lifecycle of its satellite operations.

“This long-term agreement between Azercosmos and Leaf Space is an essential step toward future sustainable development of space-related activities between our companies and signals a larger Azerbaijan-Italy bilateral strategic partnership,” said Fuad Aslanov, Vice-Chairman of Azercosmos.

“We are thrilled to be partnering with Azercosmos to support their growing presence in space while also expanding our already robust global network of ground stations by adding an antenna in Azerbaijan,” said Jonata Puglia, CEO, and co-founder of Leaf Space.

Across the globe, Venezuela is also welcoming a new ground station for the Russian global satellite navigation system GLONASS.

The ‘unsolicited measuring station’ (BIS) installation by Russian agency, Roscosmos, is part of the accord between the Russian Federation and the Bolivarian Republic of Venezuela requiring cooperation in the exploration and use of space in peaceful ways. BIS continuously monitors the open signals of spacecraft of the GLONASS, GPS, Galileo, and Beidou satellite systems to measure current navigation parameters, receive navigation messages from satellites and transmit measurement results and navigation data to the processing center online.

The ground station is an element of the GLONASS system and aims to provide high-quality navigation for end users with advanced points to positioning technology.