Users can use Braket to run their quantum algorithms on simulated quantum computers, as well as on a host of quantum processors operated by AWS, including systems from D-Wave, IonQ, and Rigetti.

Tools for a new type of computer

Quantum computing has the potential to solve computational problems that are beyond the reach of ‘classical’ computers, but that potential has yet to be met outside of one Google experiment.

“As we see quantum computing technologies make more meaningful progress, thousands of customers are asking for ways to experiment with quantum computers to explore the technology’s potential and contribute to its development,” said Bill Vass, VP of Technology, at AWS.

“The cloud will be the main way that customers access quantum computers and combine those systems with high-performance classical computing for certain types of computationally-intensive research."

Amazon Braket is available in US East (N. Virginia), US West (N. California), and US West (Oregon) AWS Regions, with more regions planned for the future.

Slowing it all down

The problem with quantum computing is that its qubits tend not to be in a quantum state or 'coherent' for all that long. Ever since the concept of quantum computing began in the 1980s, engineers and scientists have been trying to keep qubits coherent to create a practical quantum computer.

Last week, the University of Chicago announced that a team of its scientists have discovered a way to extend a quantum state via electromagnetic pulses.

Scientists Kevin Miao, Chris Anderson, and Alexandre Bourassa have been working on quantum research in the Awschalom lab at the University of Chicago’s Pritzker School of Molecular Engineering.

In their paper "Universal coherence protection in a solid-state spin qubit," the scientists discovered that a pulse allows quantum systems to stay coherent 10,000 times longer than before. 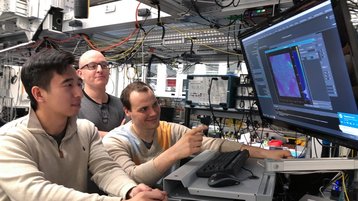 Scientists Kevin Miao, Chris Anderson and Alexandre Bourassa working on quantum research in the Awschalom lab at the University of Chicago – David Awschalom

Postdoctoral researcher Kevin Miao said: “To get a sense of the principle, it’s like sitting on a merry-go-round with people yelling all around you.

“When the ride is still, you can hear them perfectly, but if you’re rapidly spinning, the noise blurs into a background.”

The scientists tested their technique on solid-state qubits but they think it should also work with many other kinds of quantum systems.

“With this approach, we don’t try to eliminate noise in the surroundings; instead, we ​“trick” the system into thinking it doesn’t experience the noise,” Miao added.

The pulses were able to almost completely tune out some forms of temperature fluctuations, physical vibrations, and electromagnetic noise, all of which usually destroy quantum coherence.

This allowed the system to stay coherent up to 22 milliseconds, four orders of magnitude higher than without the modification, far longer than previously reported electron spin systems.

​“The broad applicability of this discovery, coupled with a remarkably simple implementation, allows this robust coherence to impact many aspects of quantum engineering. It enables new research opportunities previously thought impractical. This approach creates a pathway to scalability,” added Awschalom.

The research received funding from DARPA, Air Force Office of Scientific Research, Office of Naval Research, National Science Foundation, and the Japan Society for the Promotion of Science.