Speaking at re:Invent 2020, Peter DeSantis said that Google Cloud and Microsoft Azure do not guarantee that their data centers are meaningfully far apart, putting them at risk of failures that can impact multiple regions at once.

Everybody needs a safe space 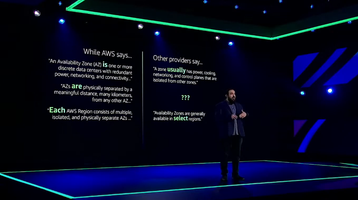 AWS defines availability zones as data centers that are within the same general region (say Ohio), but that are isolated from each other by several miles.

This, DeSantis says, is far enough apart to reduce the risk of fires, utility issues, tornadoes, or other incidents impacting both facilities.

"There's a Goldilocks zone for infrastructure. When you look at risk, the further away the better, but after a handful of miles, there are diminishing returns. This isn't an exact range, too close varies based on geographic region. We want miles of separation, but we don't want to go too far - we target a round trip latency of about 1ms.

"This is not news - you can read all about this in our documentation. Here you can see how we define regions and availability zones. Of particular note, you'll see that each region has multiple availability zones, and we clearly state that every availability zone is physically separated by a meaningful distance. It seems pretty straight forward."

However, DeSantis claims, that's not the case for rival cloud providers. Showing the websites of Google Cloud and Microsoft Azure, DeSantis said "neither provider is clear and direct about what they mean [when they say availability zones], words like 'usually,' and 'generally' are used throughout their documentation. When you're talking about protecting your application with meaningful separation 'usually' and 'generally' just aren't good enough."

DeSantis continued: "But the most concerning thing about this documentation is what it doesn't say. Neither provider says anything about how far apart their availability zones are. Two rooms in the same house are separate locations, but that's not what you want from your availability zones."

The Amazon exec took particular umbrage at Azure's claim that it operates 52 cloud regions, something that it often reminds journalists is the most of any cloud provider. "[Azure] says that availability zones are generally available in select regions. But what's a select region?

DeSantis said his revelation came from reading the "fine print," but to be fair, Microsoft is relatively transparent about which sites have an availability zone, and which do not - as shown on the Azure Geographies page. Microsoft also claims that its reliability is "in line with that of the other cloud providers."