The entire corporate archive can be downloaded into a plastic suitcase

This week, AWS introduced an unusual device to support one of its lesser-known services, AWS Import/Export.

Turns out that sometimes the amount of data customers want to move into S3 cloud storage gets so large, sending it down the wire takes more time than physically transporting hard drives between data centers.

To solve this logistical challenge, the company created the Snowball – essentially a massive weather-proof, shock-proof box full of drives that can reliably keep at least 50TB of data in transit.

The Snowball (or several) can be sent to its destination by post, with the customer simply renting these unusual appliances from Amazon for the duration of the migration project.

Unfortunately, the service is currently only available in the US. 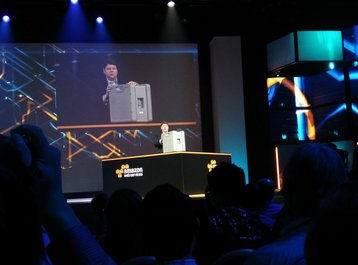 The Snowball is made of gray plastic, weighs 50 pounds and can withstand more than a few kicks. The device is controlled through an e-ink display, which automatically displays the shipping label. It has its own power supply, and exchanges data using 10GbE connectivity.

Every file that goes into the box is encrypted, and Snowball can detect when someone has tampered with the enclosure.

The overall shape and size of the device reminds us of a classic guitar amplifier.

According to Jeff Barr, ‎chief evangelist at AWS, the Import/Export service was launched way back in 2009. The model then was much less convenient, with customers actually having to buy their own hardware and package it for transportation. 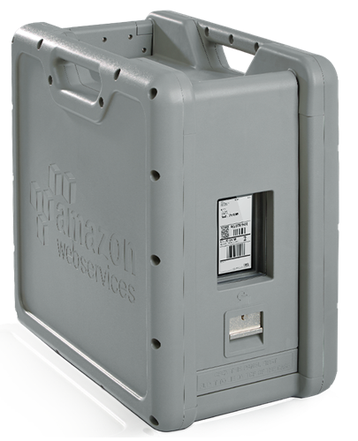 “Built around appliances that we own and maintain, the new model is faster, cleaner, simpler, more efficient, and more secure,” Barr explained. “You don’t have to buy storage devices or upgrade your network.”

A Snowball can be requested directly from the AWS management console. Renting the device costs $200 per transfer, plus the inevitable shipping charges. Barr said that even when using priority shipping, the cost of this physical data transfer will be much lower than bandwidth charges for shifting 50TB over the network.